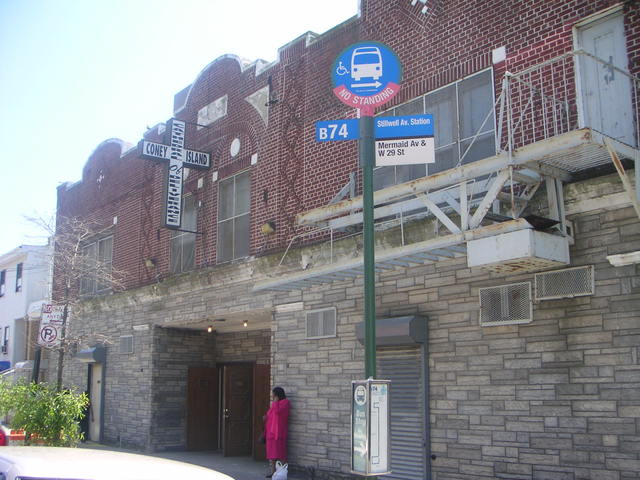 Located in the Coney Island district of Brooklyn. The Mermaid Theatre was opened in 1910’s. Later operated by Brandt Theatres, it was still open in 1950.

Today the building serves as a church.

The Horwitz' lived next door to the Mermaid, above Sinrod’s Tuxedo shop. In addition to screening movies, they would occassionally book live acts. I remember when Jazz great, saxophonist Zoot Sims played there.

My father Abe Drogin [died 1941] was Sam Schill’s partner in the Mermaid and other theaters. I have many memories to share with Suskeleh about her grandfather.

Yes, “heljes”, I’d often heard the name Mr. Drogin when my mother and aunts talked about Grandpa and their theaters! I’m on vacation in Washington DC ‘til Sunday but when I get back to my mother’s (Harriet) I’d like to get in touch with you privately by e-mail. Don’t post your real email address here (too public). I’ll see if I can find a way for us to email privately. BTW, “Suskelah” is what my grandfather, who lived with us while we were growing up, called me. Well, it was more like “Suskelah, sit strait, you’ll get a hunchback…” I can’t wait to hear what you remember! Am very excited!

I’m delighted by your response to my posting about the Mermaid, and hope that you find a way to contact me privately. I never thought it would happen so quickly because your postint was so long ago.

I have left email asking the people who run this site to help me contact you directly or to send you my email address. This may not happen until I’m back in NY on Sunday as my outgoing email isn’t working from here. Also just spoke with my mother who remembers you and your father and told me about a boat ride sponsored perhaps by a NY theater owners group where she, her sisters and your family met. I’m hoping there are pictures of the theaters themselves to add to this site. Have just spoken with one of my cousins as well since I wrote the above and we’re hoping we can get you all together so that we can eavesdrop on your reminiscences.

My email is already posted on my first message. Happy New Year! heljes

Regarding the history of the Mermaid Theatre.
My father Murray Philip Roth was born around 1925. When he was a teenager, his job at the Mermaid Theatre was to run the projector, change the movie titles on the marquee as well as the light bulbs. He also would place a large block of ice in front of a large fan in the rear of the theatre. The banner outside the theatre read air-cooled inside.
Across the street on the corner stood the luncheonette named the HUBA HUBA. Above the HUBA HUBA was a walk up apartment building. My mother Blanche Strauss would sit on the 2nd floor fire escape watching my father change the marquee titles when he noticed her time and again and had a vision of his future with her. My mother was 17 and they married and had three sons, four grandchildren and four great grandchildren. My father and mother told us this story from time to time. My father had eight brothers and three sisters and my mother had one sister and one brother. I remember when the luncheonette,theatre and a corner drugs store were still in operation. I am fifty seven and both my parents have pasted on. I also remember the city bus stop in front of the Huba Huba..My dad also told me when he was a kid Nathans hot dog was a nickel including the drink. I also remember when we walked to the beach there was a place on the way that sold fresh jelly-apples on 26th street.

My favorite childhood movie was “The 7 Foys”. I saw it at the Mermaid Theatre. The candy store next door is where I would have my egg creams and pretzel rods. An ice cream cone was 10 cents and 2 cents more for sprinkles. I spent time sitting at the table there looking through and buying used comic books.

We moved when I was in 5th grade, but my dad owned the small jewelry/watch repair shop on the other side of the theatre.

Hubba Hubba and Meyers were where my sister and I would have lunch all by ourselves like grownups. (grin)

I need to correct a misimpression I had about ‘air-conditioning’ at The Mermaid. My mother told me, soon after I first wrote here in 2004, that the system wasn’t canvas, but wooden frames and slats which were retracted on hot nights, exposing the night sky, which either then or possibly only later combined with the fan behind a large block of ice to cool the air, as described by Murray Philip Roth’s child ‘mermaidromance’ in October of 2008.

Alas, my mother, Harriet, passed away in 2010 and my Aunt May passed away only last week, so additional details will be harder to document. Some of us did meet with Abe Drogin’s son and his wife early in 2008, spurred by this wonderful website and taped that meeting; so when I find the tape, there may be more to add as they owned 5 movie theaters together during those years.

My father and his parents owned the Huba Huba restaurant across the street from the Mermaid Theater. When my grandparents died, 1967 and 69, my father sold the restaurant. The name was a saying you’d hear from men when they saw a Pinup….but the name was taken by my family because in the military, servicemen would yell out ‘huba huba’ when the mess tent was open, or meals were being served……..I remember, though I was a young teen, the Mermaid Theater becoming a church. A wonderful man, a character, was its reverend, Rev. McKeady (spelling?)…….He told me that often in his Sunday sermon he would ask his parishioners to say prayers for my family and the restaurant because of the manner in which they treated all customers with respect……in the 60’s, the residents were primarily people of color, and the store owners were white……..I was very proud to hear that from the Rev