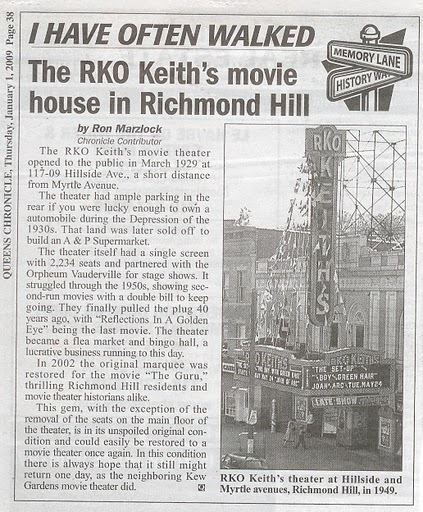 Located in the Richmond Hill section of Queens. The former B.F. Keith’s Theatre opened on March 22, 1929 with 6-acts of Radio-Keith-Orpheum Vaudeville on stage and the talkie movie “Strange Cargo” starring Lee Patrick. It later showed second-run fare and double bills.

The RKO Keith’s Richmond Hill Theatre closed on June 25, 1968 with Elizabeth Taylor & Marlon Brando in “Reflections in a Golden Eye”. Since then it has been used as a bingo hall and flea market. The marquee and front of the building were renovated and used as a location for the 2002 movie “The Guru” starring Jimi Mistry.

I have been reading all the wonderful things you all have been saying about RH Keith’s and the surrounding neighborhood where I went to HS, 59-63. Unless I missed it I haven’t hear anyone mention the DELIGHT DINER on Jamaica Ave and Lefferts Blvd and Glenn’s Bar, directly across from the Keith’s and Salerno’s. I spent many a night in both!

I visited this theater in late August as I was in the area. Sad to say, it was incredibly depressing. The theater was hosting one of their Bingo sessions and the foyer leading from the front door to the auditorium reeked of cigarette smoke. The people were frightening. It literally looked like an SRO resident convention. None of these people looked like they should have any money to gamble on Bingo and yet here they were. Yes, the theater is still basically intact but I can’t imagine any situation where this ever gets restored. It simply is a rotten location for any performing arts use. I’m not even sure where these people came from since the area is basically a middle class neighborhood. Even more upsetting is that Salernos looks like its been long gone. The space is empty. Jahn’s Ice Cream Parlor (on the other side of the theater entrance) has been gutted and turned into some king of “club” but I couldn’t tell if even that hadn’t already gone out of business. The old Triangle Hoffbrau restaurant is also gone and gutted into medical offices. The beautiful Simonson Funeral Home was torn down and a strip mall is taking its place. Will likely be hideous. Next door to that, The Republican Club reflects its party. It has been completely hollowed out and is a shadow of its former stately self. Have no idea what’s happening there.

On a good note, the Olympic Diner on Myrtle is STILL there. Rubies Costume Shop is still on Jamaica Avenue. The Queens Public Library has been restored and it beautiful with loverly landscaping.

I have now sold my nearby investment apartment and will likely never be back to this area. I wish it all the best but I fear for the RKO Keiths. What a shame.

On Saturday 3 February 1951, Bela “Dracula” Lugosi presented his in person Horror and Magic Stage show at RKO Richmond Hill. Currently I am conducting research on all things Lugosi; if anyone out there actually saw this show and/or has memorabilia (poster, handbill, photos) related to this show, please contact Bill at Thanks in advance for any assistance!

Photo of the marquee in the day.

Unfortunately, the 1940’s tax photo of the Keiths is missing, but here is the adjoining building showing the marquee.

Rumors are circulating about a possible sale of the property, including one of conversion into a church. More here

Given the possible consequences that a sale of this building would have, its conversion into a house of worship would be a pretty good one. In fact, some of the best reuses have involved exactly that.

What a difference when you look at photos of this theatre inside compared to the Keiths in Flushing.