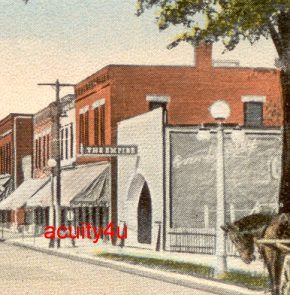 Opened in 1908, the Empire Theatre was a typical small-town nickelodeon, and was owned by a Mr. McGee and managed by a Mr. Nugent. An early pianist-accompanist was a Mrs. Emery Schultz Redman. In 1930 it was renamed Colonial Theatre.

The current Amherst Cinema operates across the the street from the former Amherst Theatre.

It was the Mary Jane as early as 1938 as there is an ad for the theater on p. 6 of this copy of the Amherst News-Times.

I am not sure that the Empire and the Mary Jane were the same theater. Here is a picture of the Empire Theater from the Amherst Public Library’s Digital Collection; the note on the bottom says that the Empire was located at 257 Church St.

Here is the newsletter in PDF format and here it is as a Google Documents page.

Today’s Amherst Cinema is almost directly across the street from the site of the Empire/Mary Jane/Amherst Theatre. The Cinema must be newer than its Cinema Treasures description currently says it is. The old theater lasted at least long enough to have its picture taken with that mid-1950s Pontiac parked nearby.

The address 248 Park Avenue turns out to have been the location of Amherst’s other silent era movie house, the Park Theatre, which operated from ca.1915 to ca.1923.

During the early 1930s this house was called the Colonial Theatre. A renaming contest was held in 1930, and the winner was announced in the June 19 issue of the Amherst News-Times. The same publication’s issue of March 2, 1933, said that the Colonial Theatre would be closed for one week for remodeling. I can’t find it mentioned in the paper after that date, so that was probably when the name was changed to Mary Jane Theatre.

According this local history of Amherst, pp. 125-129, this theater was the Empire from 1908-1930, and the Mary Jane from 1935-1944, so it would appear that it was the Colonial from 1930-1935 (there is an ad for the Colonial included, although this name is not mentioned in the text). It was then the Amherst from 1944 to 1959, when that name went on the new Amherst across the street. The building that was the Empire/Colonial/Mary Jane/Amherst was demolished in 1972. There are pictures and ads within these pages. The text does confirm that there was street re-numbering in Amherst over the years.

The Mary Jane Theatre was operating by June 15, 1933, per the local newspaper item I cited in my 2:21 PM comment September 24. Whoever captioned the old photo in the book CSWalczak linked to must have gotten the year of that name change wrong.

Mr. V.E. McGee had an addition built at his theater in Amherst in 1914, as noted in the April 25 issue of The American Contractor that year. The 30x36-foot addition was designed by Loraine, Ohio, architect H.O. Wurmser.

Page 8 of this PDF has two early photos of the Empire Theatre, plus a small photo of the house as the Amherst, probably taken around 1954. The false front on the building might have been from Mr. Wurmser’s project of 1914.