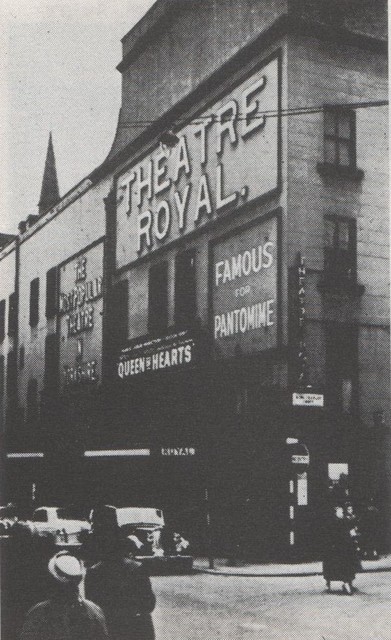 Located in Leeds city centre at the corner of Lands Lane and King Charles Croft (which today no longer exist). Built on the site of the Royal Amphitheatre, which burnt down in March 1876. The Theatre Royal was designed by Moore & Sons and was opened in October 1876. Seating was provided for 305 in the orchestra stalls, 210 in the pit stalls, 246 in the dress circle, 298 in the upper circle, 524 in the gallery, with 32 seats in the 6 boxes beside the 32 feet wide proscenium. All three levels of balconies were supported by pillars. The stage was 26 feet deep and there were nine main dressing rooms and 5 chorus dressing rooms which could accommodate 50 artists.

By 1898, it was screening short films. By December 1907, it was operated by the MacNaghten Vaudeville Circuit and films were part of the variety programme. Francis Laidler became the lessee in 1909 and he produced the first of his famous pantomimes at Christmas that year;“Babes in the Wood”.

The Theatre Royal continued as a successful live theatre until it closed on 30th March 1957 with the pantomime “Queen of Hearts”. (Francis Laidler had died two years earlier in 1955) The building was sold to Schofields and was demolished in May 1957. Today the site has been taken over by the Headrow Shopping Centre.

There is additional theatre history and pictures of the Theatre Royal on this webpage; the pictures will enlarge if clicked upon.