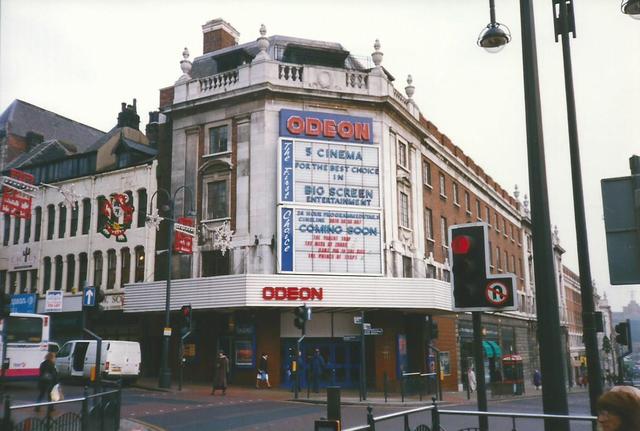 Located at the corner of The Headrow and New Briggate. The Paramount Theatre first opened on 22nd February 1932 with Maurice Chevalier in “The Smiling Lieutenant”. The sparkling new picture palace delighted 1.2 million patrons over its first year alone.

It was built for and operated by the American based Paramount Pictures Ltd. who built and operated seven Paramount Theatres in the UK, others being in Birmingham, Manchester, Liverpool, Newcastle upon Tyne, Glasgow and London’s Tottenham Court Road. It was designed by their favoured architectural firm in the UK, Verity & Beverley. The Paramount Theatre was equipped with a Wurlitzer 3Manual 19ranks organ with an embossed console, which was opened by organist Rex O'Grady.

Taken over by Odeon Theatres Ltd. in November 1939, it was re-named Odeon in April 1940. The theatre never stopped showing movies and was even the site of two concerts by The Beatles (with Roy Orbison) in June 1963 and solo in November 1963 and October 1964.

Closed in September 1968 for twinning, when the Wurlitzer organ was removed from the building and installed in the Thursford organ collection in Norfolk, where it still resides today. The Odeon re-opened on 15th May 1969 with 978 seats in an extended balcony and 1,297 in the stalls. A third screen was added in a former bar area on 23rd July 1978 which seated 126. The downstairs former stalls auditorium was tripled on 1st April 1988 and had seating for 441, 200 and 174, giving a total reduced seating capacity of 1,923.

The Odeon, which was the last picture palace in the city centre, closed on 28th October 2001 due to competition from local multiplexes and in advance of a new 13-screen cinema which was about to open. The final films were “Jeepers Creepers”, “American Pie 2”, “Atlantis”, “American Sweethearts”, “The Fast and the Furious”, “Cats and Dogs”.

In a somewhat positive development, the building was not to be razed completely, but instead was gutted internally and converted into an apartment and retail complex. The Odeon Leeds demise came just two years after the only other remaining picture palace, the ABC Cinema on Vicar Lane, closed. The demise of yet another Odeon has become an all too familiar story around England.

In late-2005, housing occupies the majority of the interior of the building on its upper floors, with a Primark clothing store in the ground floor space. Primark have since relocated and by 2021 the building is now a Sports Direct store.

Vintage photographs of the Odeon, and the console of its Wurlitzer organ:
http://www.ukwurlitzer.co.cc/2169.html

(Continued from above.) Thanks to John Farrar for pointing out where Ryanâ€™s Daughter was actually screened. Iâ€™ve since found the newspaper listings and it ran at Vicar Lane from Sunday 14th February â€" Saturday 5th June 1971 â€" 16 weeks! We normally watched films in our home town of Harrogate â€" the Odeon (still there today, thank goodness, but not the single auditorium and large screen with its amazing â€˜Austrian Puffâ€™ curtain on many wires!) and ABC (now demolished) â€" so visiting Odeon 1 at the Headrow was always a special occasion. Eventually, in 1972, we moved away to the south, but I did manage to see â€˜Diamonds are Foreverâ€™, which ran for 7 weeks from April 1972 in Odeon 2 â€" with its gold/yellow upholstery at the time. (Oops, thanks again John for correcting me on the actual colour of the curtains in Odeon 1 â€" the lighting obviously did its magic particularly well.) The big memory from this period is of what Iâ€™d describe as the best screening that Iâ€™ve ever seen anywhere of â€˜Fiddler on the Roofâ€™ in Odeon 1, which ran for 11 weeks from February 1972. Topol knocked the dust from the rafters in the barn and everywhere else at the same time! The power, intensity and effect of screenings in Odeon 1, with 70mm projection and absolutely stunning sound in a perfectly designed and fitted-out auditorium, has not been equalled, let alone surpassed, in any other cinema that Iâ€™ve since visited. Thank you to everyone who took the trouble to work so professionally in such a marvellous place, making the experience for the audience such an uplifting and a memorable one. What matters more, perhaps, than that the cinema is no longer there now, is that it was once. I think, possibly, the echo remains when you walk past the surviving exterior or visit the flats and shop within? It is a tribute, in some way, that the entire structure has not been turned to rubble but remains in part as a reminder. When the opportunity arises to create something similar again, then, no doubt, the same high spirit can be reignited in a new setting. (Thank you to: Colindale National Newspaper Library and the Leeds â€˜Evening Postâ€™.)

Clive is certainly correct when he says Odeon 1 was the perfect auditorium to experience a film. Indeed ‘Fiddler on the roof'was one of many outstanding presentations, when showmanship was the name of the game. Other stand out Roadshows were Scrooge, where full use was made of the ceiling surround speakers during the 'See the phantoms’ scene. Hello Dolly! was another great presentation in 70mm and six track stereo, especially in the parade sequence just before the intermission, the sound was phenomenal. Alan Thornton who was General Manager for 25 years always maintained that the film which stood out most for him regarding great business, was Star Wars which ran for 13 weeks from 29th January 1978. Who can forget the fabulous Dolby Stereo, a new innovation at the time. Odeon 2 also had its moments. Close Encounters played in Odeon 2 in 70mm and Dolby Stereo for 16 weeks from 2nd April 1978. Its no lie that on occasions, the queue for Star Wars along the Headrow and the queue for Close Encounters along Briggate met at the bottom on Vicar Lane!
When I worked there in the 90’s, it was great to stand at the back of Odeon 1 and experience a full house for one blockbuster after another, ‘Dances with wolves’ and ‘Silence of the lambs’ for example but nothing compared to the Roadshow years.

I recently recieved a letter from Beryl Marshall, who was Assistant Manager at the Odeon during some of my time there.

She writes….
I started at the Odeon in 1961 as a full time Usherette. The Manager was Mr Holgale, the Staff Supervisor was Mrs Burgess. We had wooden ice cream trays, which were very heavy and you had to walk down the aisles backwards. One usherette was spotlighted to commence sales. At the front of the auditorium was a rising platform, originally housing an organ played during intervals. In the building we had a classic restaurant. We had many live shows and I saw stars like; The Beatles, Tom Jones, Shirley Bassey. The Beach Boys spent all day prior to the show, fine-tuning the acoustics. I remember meeting the old Leeds United players; Billy Bremner, Alan Clarke, Paul Reaney. We had many Charity Nights and famous Boxing Matches, via satellite from America. We also broadcasted late night Chinese shows. We then changed to three cinemas, the smallest being where the restaurant (then bar) originally was. In September 1968, I was made redundant (closure for twinning) but returned in May 1969 to re-apply for my post. I continued working untill ill health forced me to leave in 1992. I have happy memmories of my time in the Odeon and hope my words have stirred some happy thoughts in readers.

I know that a considerable number of cinema organists in the U.K. had the christian name of Reg or Reginald (e.g. Dixon, Foort, Foxwell, Stone, and about twenty others!), but I think you’ll find that Mr O'Grady’s christian name was Rex.

CGG, I was the Harrogate Odeon,s assistant/relief manager in the late sixties and your comments about the, then, single screen cinema make welcome reading. Although we prided ourselves on the standard of presentation, we never had a festoon curtain which, I believe, is the type to which you refer. Our house curtains were plain grey velour while the screen curtains were gold satin (previously used as house curtains and which, in 1968, the projectionists and I reinstated when we realized the CinemaScope screen frame was set far enough back not to foul the tabs on the original screen tabs track. Both sets of curtains parted centrally and opened to the side. The ABC Regal was far more ornate, being one of W. R. Glen’s best interiors, and they did indeed have a gold, festoon curtain which gathered upwards on many wires. The festooning satin looked very attractive when lit by the three-colour circuit footlights.

Hello to the Harrogate Odeon’s assistant/relief manager. The first film I recall going to see at the cinema was ‘In Search of the Castaways’, with Maurice Chevalier, Hayley Mills and Wilfrid Hyde-White, on the original single screen at the Harrogate Odeon, in January 1963. From what you say, then I think it must have been the gold satin screen curtains onto which the adverts were sometimes projected during the earlier part of the 1960s. This is what I recall from the Odeon. Are you sure about the earlier part of the 1960s? Since Harrogate is rather off-topic here I’ll have a think about things and aim to post a comment later under the relevant cinema page.

With apologies for this being the Odeon Leeds site, but in answer to the question raised above, here’s a link to an early picture of the Harrogate Odeon (1930-9) showing a picture being projected onto the fine inner screen curtain(s):

Whether, 24 years later, this was a single curtain that rose up or centre-closing curtains, I’ll have to leave to someone who worked there during the early to mid 1960s!

Ive just uploaded a photo of the console of the 3-19 Wurlitzer which was opened by REX O Grady not Reg. The organ was removed around 1968 and its next home is the Thursford collection in Norfolk where it has been used on almost a daily basis since.Its a shame this beautiful theatre was let go.Only two of Paramounts theatres survive.Plaza Piccadilly Circus was also stripped internally.The Paramount Birmingham is still open,but has been drastically altered by Odeon over the years.