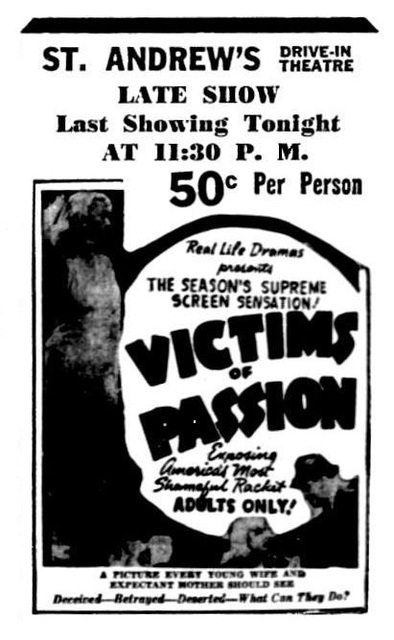 St. Andrew’s Drive-In opened on June 1, 1949, featuring “Thunder in the Valley” with Lon McCallister and Peggy Ann Garner. It was part of the L. H. Ayers Theatres chain of drive-ins, along with the Summerville Drive-In, 4-Mile Drive-In, and the Holly Hill Drive-In in Holly Hill, SC. They were advertised as “Charleston’s Only Home-Owned Drive-Ins”.

The St. Andrew’s Drive-In closed on February 4, 1953, and reopened on February 9, 1953, as the Henry’s Drive-In. Proprietors of the newly reopened drive-in were Henry Smith and John H. Pembroke. On February 15, 1953, it started to be advertised as Henry’s-St. Andrew’s Drive-In. The drive-in closed for good in November 1954. In 1957, St. John’s Episcopal Church built a school on the old drive-in site. Eventually a church and rectory were built. St. John’s Church was combined with St. Peters Church due to declining membership. In 2004, the property was sold to Coastal Community Church.