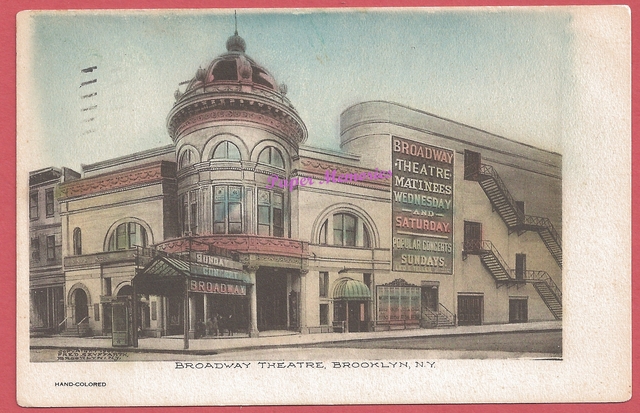 This palatial 2,000-plus seat theatre stood at the busy intersection of Broadway and Myrtle Avenue in Brooklyn. Teller’s Broadway Theatre was opened on March 21, 1904, with a production of “Babes in Toyland”. It was operated by Loew’s Inc. from August 1915 when a Welte organ was installed. In 1916 a Moller 2 manual 15 ranks organ was installed and this was replaced by a Moller 3 manual 6 ranks organ in 1918. Loew’s Inc. operated the Broadway Theatre until 1954. From 1955 to 1957 it was operated by Century Theaters.

In 1959 it reopened as the Rio Piedras Theatre playing Spanish language movies. It was closed in 1973.

Because of the BMT Jamaica Line El tracks overhead you could not appreciate the impressive architectural features of the theater building highlighted in the postcard drawing. Of course the later addition of the Loew’s marquee also distrupted the building view. Saw the Conqueror there with a miscast John Wayne, & Susan Hayward as the love interest (although even back then I knew that there was no attraction between them). I got to appreciate the theater’s impressive details while bored by the feature. Alexander the Great with Richard Burton did a better job of holding my interest.

I remember when the Broadway was torn down in 1998. The last wall to remain up was the procenium arch and stage area. I still remember looking at the theater’s inside, and that wall, out in the sunshine. it was all in clear view from the Myrtle-Bway subway station platform. It was a surreal sight to behold to say the least. I only wish I had my camera with me that day.
Chris

I was only in the Broadway Theater once, and don’t really remember too much about it, other than the fact that it was quite fancy. I think it must have been some time in the 40’s, and I agree it was a showplace.
I do however remember a lot about it from the outside. I lived over on Pilling St as a kid, and I would often go shopping with my mother on Knickerbocker Ave. We would take the Jamaica train to the Myrtle and Broadway elevated station, and get off and take the Myrtle El to Knickerbocker Ave. I remember always looking at the Broadway Theater as it towered above the station. So many memories. This was not far from the Rogers Theater down the street, which I also remember seeing the marquee from passing trains. But the two didn’t compare.
One of the first DVD’s I bought was the movie “Ghost”, because it was filmed in the neighborhood, and you can see this theater in that movie. I am 82 now, and a big fan of old movies. I know isn’t exactly an old movie, but for nostalgia, my daughter bought it for me. My daughter has slowly been helping me build my DVD collection.

So glad to have found this site.

If anyone has any memories to share, my email is

What year did the Broadway close?

A very interesting page – and a wonderful picture, albeit the fact that, as previously noted, the elevated train line mysteriously disappears from the scene.

If I had not stumbled across this picture when viewing some of Jayar’s photos on the Bushwick RKO page, I would never have learned about this fascinating theater. Since I usually search theaters by zip code, the fact that it is not indicated at the top of the page means that I never found the Broadway during my previous searches. To address this, I hope that management will add the Broadway’s zip code – 11206 – to this page.

Built for Leo Teller, the architect was J. B. McElfatrick. It opened March 21, 1904 with “Babes in Toyland.” Drama critic Robert Grau, in 1909, referred to the Broadway as “the best suburban theatre in America.” You can catch a glimpse of it, as the Rio Piedras, in “The French Connection."Â

Somewhere out there are pictures of the theatre when it Rio Piedras, Spanish language programing in the 70’s

Willburg145 – Ask and it shall be given unto you. Uploaded a photo showing the marquee of the Rio Piedras. I found it on a site called Scouting New York which documents locations of films then and now. The film in question for this was the French Connection.