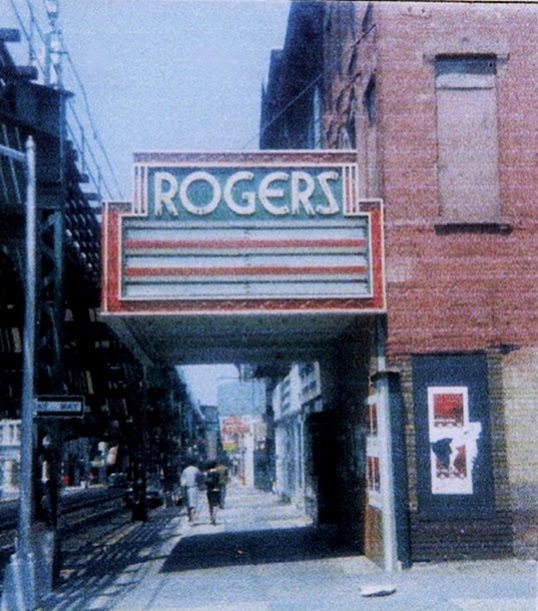 Hello Joe..
I can’t say for sure, but it looks a lot alike the other Rogers Theater, the one on Rogers Avenue in Crown Heights. I was only there once, back in July 1951, but the shot towards the front of the house looks a very much as I remember it.

I agree with Lundy. Never having been to the “other Rogers”, my recollection of the Broadway house in the “50’s is of a very simple/plain setting with wooden seats, no similarity to the house discussed in the 1936 article of Boxoffice. Similarly, the communities served by each theatre would reflect the differences. The B'way location on the edge of Williamsburg & Bushwick, under the el served a poor & working class community. The Roges Ave. address was located near Flatbush & Crown Heights, two upwardly mobile middle class neighborhoods, more accustomed to luxury and comforts.

Let me add my two cents here in support of JF and Hector’s position.

First, the 1936 article sets the theater’s capacity at 600, which fits the Crown Heights Rogers to a t, but not the Broadway theater’s considerably smaller 488 seat capacity.

Second, and more importantly, as many of the previous comments suggest, the Williamsburg Rogers – with sawdust on the floors, cats in the aisles and an oater driven repertoire – would have been one of the last places to be featured as the subject of a classy upgrade. It was a fine and much beloved local movie house – nothing more and nothing less. It is also a prime example – as noted by my colleague Bway elsewhere on this site – of a modest building with an awning attached to it, that typiified a number of the modest early movie houses.

Well, so far that’s three to zero against the Boxoffice photos being of this Rogers Theatre. If they depict the Rogers Avenue Rogers, though, then the attribution of the design of that theater to Charles Sandblom must be wrong. Boxoffice often got some details wrong (that’s why I discounted their reported seating capacity of 600 in that article), but I don’t think they’d make a mistake about who sent them photos for publication, and the text of that article is quite clear that the photos were supplied by architect William Hohauser.

I wonder if maybe the Rogers on Broadway was an early Sandblom design, and that’s where the confusion came from? He was working independently (after leaving Thomas Lamb’s office) as early as 1921. On the other hand, from the descriptions above it doesn’t sound as though this Rogers Theatre had any architecture to speak of, and that makes it less likely to have been a Sandblom design. In fact the descriptions (wooden seats, sawdust on the floor) sound like it might have been a survivor from the nickelodeon days.

It is possible that Sandblom was the architect of the Rogers in Crown Heights but that Hohauser was the decorative designer for the interior. The article in Boxoffice does stress design detail.

It think it almost impossible that Sandblom was architect for the Broadway Rogers given its age, and the styling and condition at closing.

A thanks to Joe Vogel for bringing up this interesting question.

In reviewing the last few posts and consulting the City’s Dept. of Building on-line file, I came up with a few facts and observations that I would now like to share. Here goes:

Thanks John for all your great research on this!

Good insights from John D. Sub-sub run nabes had a smaller operating “nut” than the larger palaces so from an economic perspective, it was not unusual for the Rogers, like the nearby Grand & Graham survived the much grander Republic and the Alba.

To put this to sleep, that is the Rogers on the corner of Broadway and Park street in the Bushwick Section. I was raised on Park street about 5 doors down from the theater….1948/1964.