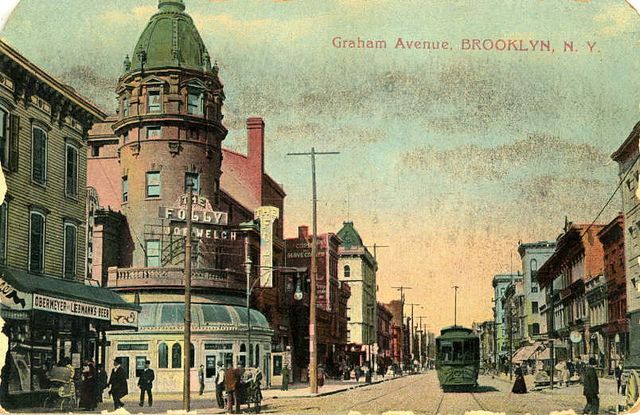 Located on the corner of Graham Avenue and Debevoise Street. This long-gone Brooklyn theatre is notable for being one of Bushwick-native Jackie Gleason’s jobs, emceeing, in his teens, not long after his first gig, emceeing at the Halsey Theatre. The Folly Theatre was opened as a vaudeville theatre October 14, 1901. Seating was provided for 2,170, with 800 in the orchestra, 550 in the balcony, 700 in the gallery and 120 in the box seats. The proscenium was 30 ft wide.

It was taken over by William Fox in July 1909 and was presenting vaudeville and movies, renamed Fox’s Folly Theatre. It was equipped with a Moller 3 manual, 21 rank organ in 1915. In 1931 it was taken over by an independent operator and reverted back to the Folly Theatre name. It was closed in 1939 and after ten years standing unused it was demolished in December 1949.

Thank you Bway and Warren for this terrific vintage picture. I just can’t believe that such a significant theater existed on this corner. I just have two additional comments to add:

In his comment of April 9, 2008, Warren identifies the architects of The Folly as the firm of Dodge & Morrison. The senior architect of this firm, Stephen Webster Dodge, is the subject of this brief biography in a 1908 book, “Flatbush of Today.”

The biography only mentions three theaters designed by the firm, all of them already attributed at Cinema Treasures. The firm’s junior partner, Robert Burns Morrison, didn’t have a biography in the book. Perhaps he didn’t live near Flatbush.

I just noticed an omission at the top of the page. While both the Brooklyn Theatre Index and a previous comment made by Warren G. Harris indicate that the Folly was constructed by the firm of Dodge & Morrison, no reference to this on the page itself appears. Given the impressiveness of this long gone building, I think a little recognition is due. Hopefuly, the site administrator will agree.

There are odd things going on with the site lately, Ed, but I hadn’t noticed this one until you pointed it out. It’s another thing for Ken to tell Patrick about. Have you noticed anything else?

I noticed that when you try to search for name or zip code, you initially only get the “Open” theaters which basically involves only a small percentage of the places. Then, when you limit the search to “Closed” or “Demolished” the theaters that come up do not correspond to the category. For example, when I search for 11221 zip and “Closed” I still get theaters that are situated all over the place.

The default to open theaters when searching is a new feature of the site, and not in itself a bug. The introduction of that feature, and the division into theaters that are open, closed, etc., probably has something to do with the bugs that have turned up since the change was made, though. Changing a lot of code at once sometimes leads to unintended consequences. The comments, photos, and listings that have gone missing or don’t go where they should are still on the server. They just aren’t all being fetched properly when requested. I’m sure Patrick will be able to get the problem fixed once he returns from his holiday.

Joe… Another consideration is that many comments and photos have been deleted by CT members themselves, as they “back themselves” out of CT existence. It seems that some members get so incensed over disagreements or perceived insults or slights, that they then go about systematically removing any traces of their contributions on the site. Most recently, a long time member here passed away, after having contributing over 4000 photos and a great many comments. It seems that, for reasons unknown, the entirety of that person’s photographic contributions were removed by a family member, and, last I knew, all of their comments to theater threads were being eliminated one by one. Sad, but true. I’m hoping that the instances to which you refer are mere technical glitches that can be corrected.

If comments are removed by members, the number in the “view all comments” field is automatically reduced. I found a page (I can’t remember which one it was now) that was displaying six comments, but had a “view all 12 comments” link at the top. Clicking on the link, the new page displayed only the same six comments that were on the first page. That has to be a technical issue.

It is likely, though, that the comment on the State Theatre in Tempe that I found in the Google cache but not on the CT page itself was one that had been removed by a member. Google’s cache usually lags a bit behind changes in the pages that have been cached. But probably not all of those comments have vanished entirely from the Internet. At least some of them are bound to have been preserved by the Internet Archive’s Wayback Machine.

A recent illustrated article about the Folly Theatre and its architectural importance can be found at the Brooklyn Public Library’s website. Click here