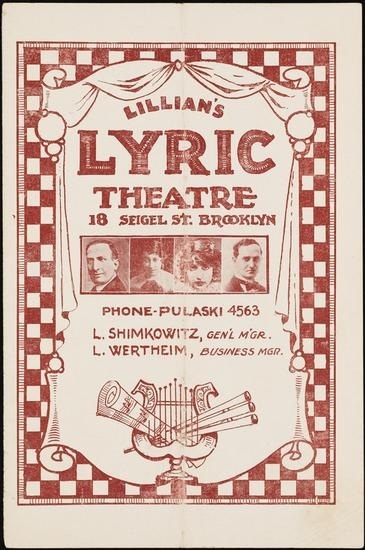 As noted in the Brooklyn Theatre Index, the Lyric Theatre initially opened in 1908 as a vaudeville and movie house. It was apparently part of the Marcus Loew group of theaters but was leased to a Yiddish theater group in 1910. For the rest of its life, which ended in 1937, it served primarily – if not exclusively – as a legitimate theater, serving straight plays and musical comedies in (mostly) Yiddish. However, since the Lyric Theatre did enjoy a brief life as a movie theater, it can safely be added to the Cinema Treasures list.

During its extensive run, the Lyric Theatre, as could be expected, was situated in a heavily Jewish community based around nearby Graham Avenue. A 1910 article in the New York Clipper referred to this area as "the Ghetto of Brooklyn", and Graham Avenue is also referred to as the "Ghetto Street" in Betty Smith’s "A Tree Grows in Brooklyn", which was set Williamsburg.

During the 1960’s a large section of this now significantly deteriorated community, including this site, was demolished to make way for the large scale Lindsay Park housing development.

Before submitting this page, I was especially careful to note that the Lyric had actually served as a movie palace for some time – in this case for at least two years. This is an important consideration since the Brooklyn Theatre Index does not draw a distinction between theaters that had motion picture histories from those that did not.

This consideration places the Lyric in contrast to two Williamsburg based theaters noted in the Index that did not apparently possess a cinematic history. The first – the Gayety, situated at 18-22 Throop Avenue – had a long and distinguished history as a legitimate theater venue. However, nothing cinematic has been documented here.

In addition, the Italian Theatre, once situated at 260 Bushwick Avenue between 1911-17, may -or may not – have been a movie palace. It could just have easily have been an ethnic theater – such as the current day hispanic Thalia Theater in Sunnyside Queens – that presented drama in Italian and possibly some opera, but nothing cinematic.

Until come evidence appears that movies were actually played at these theaters, the Gayety and the Italian should not have pages in Cinema Treasues. But if anything cinematic turns up, they should certainly join the crowd.

I hope anyone who knows anything about the Lyric, Gayety and Italian theaters can enlighten about their interesting histories now.

Well, no sooner had I noted the lack of a cinematic link to the Italian Theatre than no one other than the Brooklyn Theatre Index’s author politely pointed out one to me. Thanks Cezar, and I will be adding this site soon.

John, the theater happened to be added to Cinema Treasures, how can we know for sure that movies never were shown in that theater? I say let it stay on CT. It would be a shame to remove it if it had shown films and if it didn’t, I guess it’s not the end of the world, it’s just a Theater Treasure.

I was the person who just added the Italian Theatre, but I only did so after being reasonably sure that it possessed – unlike the Gayety – some cinematic history. A cinematic link need not be strong – in the case of the Lyric, it may only have occurred during its first two years of existence – but their must be something. Otherwise, many theaters that never presented a single movie could find their way to the cinema movie list. I think the site moderators are quite justified in insisting on this policy.

This issue has received some attention on other pages – see, e.g., Cinema Warsaw – and, unlike other commentators, I have taken a pretty generous position for inclusion – as long as SOME sort of cinematic history could be documented or strongly inferred.

I question the map location of the theatre based on the street address. Before the construction of the Lindsay Park Housing complex, Siegel Street began at Broadway, 2 blocks to the south. These blocks contained residential and light manufacturing units. The address listed for the Lyric would have placed it between B'way & Leonard St. and not at the corner of Manhattan Av.

Hey Astyanax… I just updated the street view to face the Lindsay Park housing looking across Manhattan Avenue from Seigel Street. Since the stretch of Seigel Street where the theater was located is no longer in existence, I believe this is the best mapping we can obtain, without entering a completely false address to move the marker closer to Leonard Street or Broadway.

Ed, you caught the current location of this old theater just about right. Thanks.

The marker should actually be closer to B'way.

Thanks so much for this picture, which gives a good indication of how things were in pre-Lindsay Park Williamsburg.