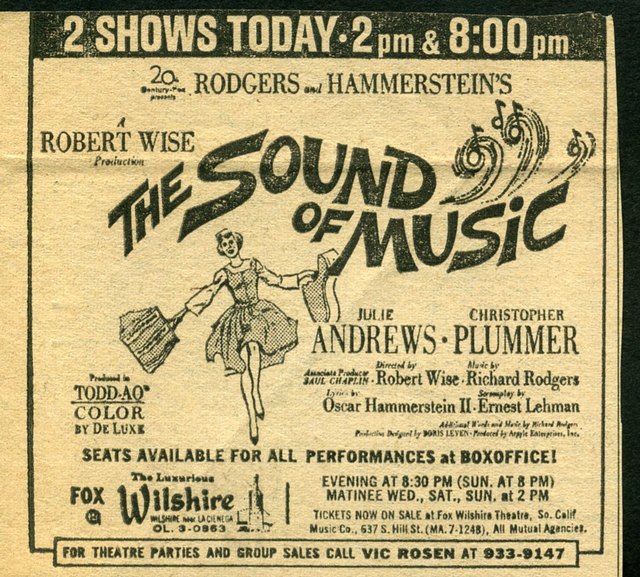 At the eastern edge of Beverly Hills sits this elaborate Spanish Art Deco style structure. Designed by noted theatre architect Simeon Charles Lee, this was his 3rd theatre design, after the Tower Theatre and the Los Angeles Theatre, both in downtown Los Angeles. The Fox Wilshire Theatre was also the first of many he designed in an Art Deco style. The Fox Wilshire Theatre was built for and operated by the Fox West Coast Theatres circuit, and it opened on September 19, 1930 with the 4 Marx Brothers in “Animal Crackers”. Stars appearing ‘in person’ on opening night included:Fay Wray, Jeanette MacDonald & Robert Montgomery. Seating was provided for 2,296 in orchestra and balcony levels.

Dominating the exterior is a 6-story corner tower, containing luxurious apartments on the top two floors. It was originally topped by a huge rotating sky sign spelling out the name ‘FOX’ in large vertically placed letters. The exterior of the building was originally painted in a buff color and had black vertical stripes running up the tower and Deco style decorations painted in silver.

Inside the hexagonal shaped lobby, there is a decorative metal open balcony surrounding the space, where in the early years, there was placed an Estay Minuette portable organ, which had 2 Manuals / 3 Ranks and was contained in a large grand piano case.

The splendid Art Deco style auditorium was a sight to behold. Designed by interior designer Harold B. Franklin, it was painted in black and silver, with coral colored draperies and seats. The rectangular proscenium arch has ‘zig-zag’ decorations surrounding it, and the anti-proscenium surround contains a highly stylized fretwork design. A full stage was provided, as well as a ‘green room’ and dressing rooms. The Wurlitzer organ was a regular 2 Manual / 9 Ranks that had been enlarged by Louis Mass and pipe-maker Archie Marsh, especially for this theatre.

During the early years in the 1930’s, it was a popular meeting place for lunchtime foyer concerts and occasional midnight matinees which would be attended by film stars who lived in the locality of Beverley Hills. The open lobby on the street front was modernized over the years, losing its street ticket booth and gaining a new marquee, while the exterior of the building was painted plain white, which diminishes the original Spanish Art Deco style of the building. The Fox Wilshire Theatre was the site of numerous premieres, including the World Premiere of Walt Disney’s “The Sleeping Beauty” (in 70mm) on January 29, 1959. “The Sound of Music” began screening as a roadshow engagement in March 1965, and played for 93 weeks. The Fox Wilshire Theatre was closed as a movie theatre in 1977, and after laying empty for several years, it was taken over by the Nederlander Theatres Group in October 1981.

The Wilshire Theatre was renovated and redecoration was carried out by architect Benjamin Marcus Priteca’s protege, Richard F. McCann. Unfortunately, the original black and silver color scheme was covered in hues of dark red and tan paint, giving a very gloomy look to the auditorium. However, it began housing touring productions of Broadway musicals, and it is reputed to be Sir Andrew Lloyd Webber’s favourite Los Angeles theatre. It became one of Los Angeles' premiere venues for concerts and other live events.

Over a quarter century later, the newly renamed Wilshire Theatre Beverly Hills is still home to numerous concerts and other live performances. It is also used for film and television production. In the early-2000’s the theatre was ‘dark’ for long periods and it was ‘let out’ to be used as a Jewish synagogue on a regular basis.

In 2009 it was announced that Haim and Cheryl Saban would donate five million dollars for the restoration of the proscenium, orchestra area, and marquee. It reopened as the Saban Theatre.

Walked by the theatre the other day and they were hard at work installing new carpet in the lobby, and possibly throughout.

There was already new carpet in the auditorium when we held the All About. It’ll be nice when they get the carpet and walls and decorations all matching. Right now the place looks a bit odd.

This was the location of the L.A. Conservancy’s first screening in Beverly Hills during their annual Last Remaining Seats program. There were two showings of “The Wizard of Oz,” at this theater on Saturday, June 30th.

The October 2013 issue of “Signs of the Times” magazine tells you more than you could ever want to know about the restoration of the Saban Theatre marquee. The lead contractors were Duarte Design and Alpha Architectural Signs.

“The Sound of Music” premiered here fifty years ago today. With a reserved-seat run of 94 weeks, I imagine it’s the long-run record holder for this venue.

The TVLand 2015 Awards were filmed here, and the place looked great.

Wow from the original photos to the ones in 2002 it looks like someone repainted their basement. One thick coat of ugly colors slapped on with a big brush.

I hope the Saban restoration was able to bring it back to its former beauty. What a great place it probably was to see SOM.

I’m curious as to what exactly is going on with the Saban these days. It’s just down the street from me, and I pass it frequently when driving, but there never seems to be anything happening there. It just sits there, GRAND, magnificent.

The Saban’s web site shows from two to four one-night events a month scheduled over the next several months, mostly baby boomer nostalgia music acts (Peter Cetera, Isley Brothers, Paul Anka, etc.) It would be nice if they could throw in an occasional classic movie, but I don’t know if they even have projection equipment anymore— or a screen, for that matter.