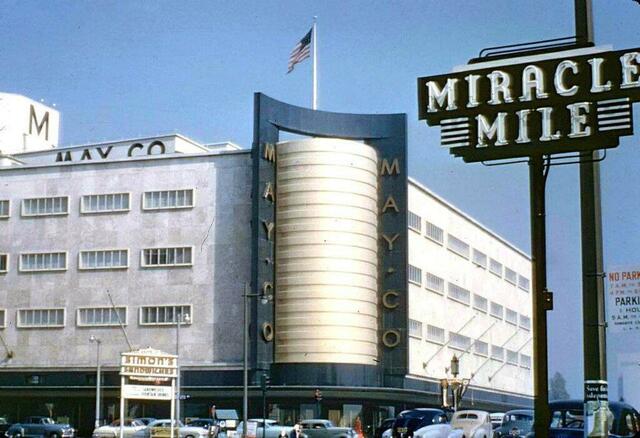 Located on the ‘Miracle Mile’ section of Wilshire Boulevard. The David Geffen Theatre and the Ted Mann Theatre opened to the public September 30, 2021, along with the Academy Museum of Motion Pictures. The museum is located in the renovated Albert Carey Martin/Samuel A. Marx-designed 1939 May Co. Building (a May Department store until 1992 and a Los Angeles Historic-Cultural Monument) was later renamed the Saban Building, which is connected to a newly constructed glass sphere.

The 288-seat Ted Mann Theatre is in the basement of the Saban Building and was funded by a gift from the Simms/Mann Family Foundation. The theatre is equipped for 16mm, 35mm, 70mm, Dolby Vision laser projection and Dolby Atmos sound and shows films throughout the year. The Saturday family matinees ranges from films such as “Labyrinth” (1986) to “Abbott and Costello Meet Frankenstein” (1948).

The 1,000-seat David Geffen Theatre is within the sphere and screens films in 35mm, 70mm, Dolby Vision laser projection, and Dolby Atmos sound and has space for a 60 piece orchestra. The 1939 film “The Wizard of Oz”, with music performed by the American Youth Symphony and conducted by David Newman, was the opening day program. Both showing were sold out.

Renzo Piano, working with Gensler, designed the $484 million museum and the sphere, reached by three bridges to the Saban Building, which was named for Cheryl and Haim Saban, who in September 2017 contributed $50 million to the museum.

The Motion Picture Academy notes the museum is destined to be the world’s premiere institution dedicated to the art and science of movies. It includes 12 million photographs, 19,000 films and videos, 80,000 screenplays, and much more. There is an admission charge and for visitors the Sidney Poitier Grand Lobby would be the starting point to access the galleries, theaters, restaurant and store, which has a selection of cinema books and movie memorabilia.

Exhibitions include seven galleries ranging from the Spielberg Family Gallery to the Marilyn And Jeffrey Katzenberg Gallery. AMC Theaters is represented by Dalian Wanda Group, who donated $20 million for the Wanda Gallery.

Bill Kramer, President with Brendan Connell Jr. CEO and Jacqueline Stewart, Chief Artistic Programmer, lead the Executive Team. The 27 member Board of Trustees is composed of members from the arts, business and entertainment Industry. Some of the more recognizable members are Tom Hanks, Laura Dern, Eva Longoria and Diane Von Furstenberg.

Dining is provided in Fanny’s, a 250-seat café created by Bill Chait and Carl Schuster, with support from Wendy Stark, whose grandmother was Fanny Brice. Wolfgang Puck is the exclusive special events caterer to the museum.