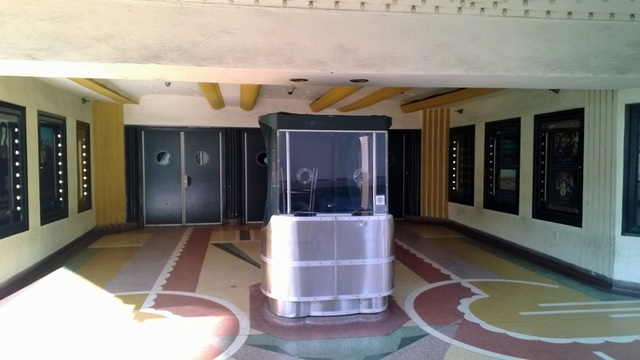 Two photos of the El Rey from November 2009:

The El Rey is featured in CSI as a burlesque club, season 11, episode 12 “A Kiss Before Frying.”

You can see the El Rey’s marquee in the film when Eddie and Roger are fleeing in Bennie the Cab.

My guess is that’s not the real El Rey; it looks like they dressed up some street and recreated the El Rey. For one thing, the street looks too narrow to be Wilshire Blvd. There’s an island at that point as well, planted with trees, that’s been there since the early 90s, I believe. I also think this is closer to downtown: that skyscraper in the background looks like the Aon Center. If this was the El Rey, there’d be another building down the street with the address 5455 on it (see Ken MC’s photo of 1/16/2009). It would block the view of those other buildings.

What does everyone else think?

Went to the El Rey tonight (10-12)for the first time in 25 years. Very few vestiges of the movie house, but it is a fairly attractive concert venue, in a utilitarian sort of way. Glad to see the street lobby box office is still being used for ticket pick up.

Glad I only paid $5.50 on Goldstar, as the two bands from Italy, Caparezza and Apres La Classe, were a loud and dangerous insult to the ears. It’s a joke: there were three sound engineers in the booth needed to produce garbage bass distortion. Even many young people fled to the outer lobby and street for relief. It was hard to tell if the guitarists had any talent as they mainly played mindless chords. The two drummers, however, were quite good.

The supreme irony from Apres La Classe was that they used taped big band intros of “Take the A Train”, “Caravan”, and the “Theme From the Godfather”, for three numbers. First taped class and then live trash.

The El Rey sign at night is positively gorgeous.

Going back to the pictures from Roger Rabbit, that is not the real El Rey. In the second linked photo, one can clearly see the One Wilshire building in the background, which puts this location somewhere downtown.

I WAS A UNION PROJECTIONIST THERE IN THE EARLY 70’s. IT WAS A NEIGHBORHOOD HOUSE SHOWING 2nd RUN FILMS. LUCKILY IT GOT SAVED AND BECAME A LIVE THEATRE FOR MUSICAL EVENTS.

Interestingly enough, I now work for the company that bought this venue – AEG: Anschultz Entertainment Group.

The El Rey’s marquee is shown lit up at night in season 3, episode 19 of The Beverly Hillbillies.