Architects: Clifford A. Balch, Percy A. Eisen, A. R. Walker 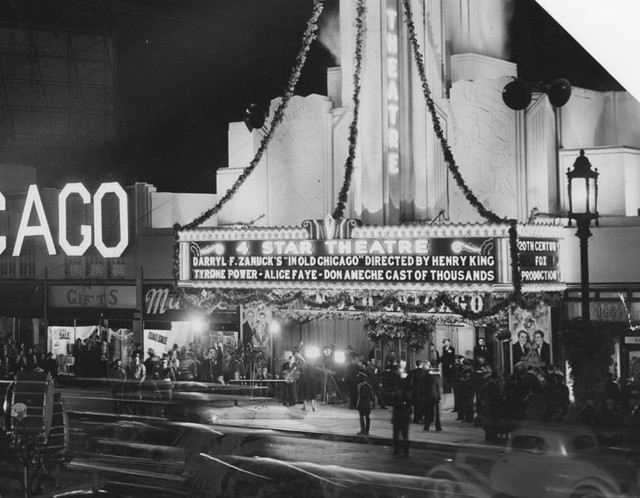 Built by United Artists and playing first run United Artists films, the UA 4 Star Theatre opened on November 29, 1933 with Leslie Howard in “Berkeley Square”. It was was a sister theatre to the United Artists Theatre in Pasadena. In the late-1930’s it was operated by Fox West Coast Theatres until the 1940’s, when United Artists took control again. It remained a first run theatre for United Artists movies until the 1970’s, when by then it had been equipped with 70mm projection equipment. The theatre ran some of the best films in Hollywood, showing repertory films on a large 70mm screen.

When the Mitchell Brothers of San Francisco took over on September 11, 1973, it became an adult cinema, opening with Marilyn Chambers in “Behind the Green Door”. It operated as an adult movie theatre for 10 years, later reverting to 3rd run release and Indian movies.

It eventually closed and became a church. In 1999, the church cemented over the Art Deco style bas relief figures on the facade which depicted ‘Artistry’ and ‘Unity’, which were also a feature on the United Artists Theatres in Pasadena and Belvedere Gardens (East Los Angeles). The church moved out in 2012 and the building briefly became the Oasis Theatre, available to hire for live performances.

It was demolished in December 2014.

“Gone With The Wind” was screened for the press at the Four Star on December 12, 1939 (three days before the huge Atlanta premiere). For more info see the book “The Art of Gone With the Wind: The Making of a Legend” by Judy Cameron, Paul J. Christman and Daniel Mayer Selznick.

This opened on November 29th, 1933. Its grand opening ad can be found in the photo section for this theatre.

what was the last 1st run engagement this
theater had?

“The Graduate” opened here fifty years ago today. The film went on to play one week shy of a full year. (Anyone know of a film that played here for a longer period of time?) And here’s a retrospective article to commemorate the film’s golden anniversary.

San Francisco’s Mitchell Brothers chain of adult theatres entered the Los Angeles area on September 11th, 1973 with the UA Inglewood and this theatre. The grand opening program was “Behind the Green Door” with Marilyn Chambers. Grand opening ad posted.

Louie Federici operated this theater in the 1980’s. At one time he operated The Gordon on La Brea as well as The Cinema on Western Ave and The Encore on Melrose.