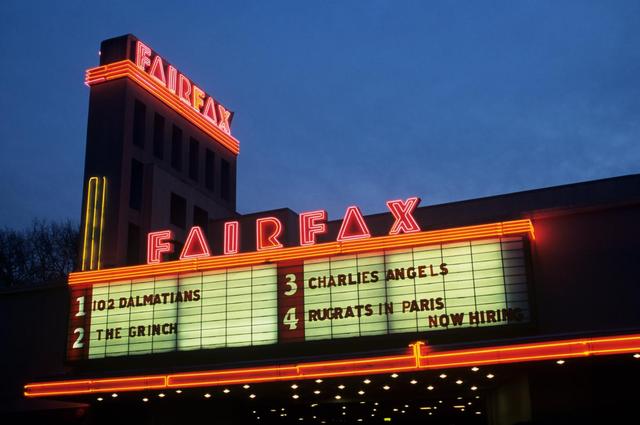 The Fairfax Theatre was constructed by the Blumenfeld Chain in 1950 as a single screen movie house on June 30, 1950 with Gregory Peck in “The Gunfighter”. The theatre was later split and then purchased by Cinema West.

Restored in 1993, the theatre has added three more screens, for a total of five auditoriums. In 2012 a sixth screen was added.

THE FAIRFAX WAS SAVED BY THE LAEMMLE CHAIN AND IS SCHEDULED TO BE REOPENED ON 11/2 AFTER A VERY SHORT CLOSURE OF ABOUT A MONTH OR SO. I WAS BEING RUN AS A DISCOUNT HOUSE WITH 3 SCREENS. OLD SEATS ARE BEING REMOVED WITH FEWER NEW SEATS AND MORE LEG SPACE BEING ADDED.

Tom, I think you’re thinking of the Fairfax 3 Theaters that was previously run by Loews Cineplex. This Fairfax theater is still owned by Cinema West:

When it became two theatres in the early 90’s, there cut the last third of the seating and made it the second theatre. The larger (#2) main theatre looks and feels like the original. #3 and #4 are brand new “screening rooms”, maybe seats a hundred each. Cinema West’s original plans were to open a 8 or 10 plex down the street, but the town of Fairfax said no to that.

In 2003, all the seats were replaced with the reclining back/love seat arm rest style seats popping up in other movie houses.

Thanks Fairfax for having the only theatre in your area with digital 3-D. Today and this week watch the crowds come to see ‘Beowulf’ in the new 3-D at the Fairfax. I can’t believe the Century/Cinemark guys are so slow in your area to install this new technology. Why go to a movie theatre and see a 3-D movie in boring flat 2-D! Your business will be triple from the 3 Cinemark theatres showing the 2-D 35mm print. Watch out as soon as they see the $$ going to the indi Fairfax Theatre they will wake up and get caught up with the new digital world of projection. Enjoy the business while you can at the Cinema West Fairfax.

According to their web page, they will install solar panels soon and are claiming they will be the first cinema in the nation to be completely solar powered.

This is from the San Rafael Daily Journal in June 1950:
http://tinyurl.com/ooqm6t

The theatre is currently undergoing new construction of a sixth theatre.