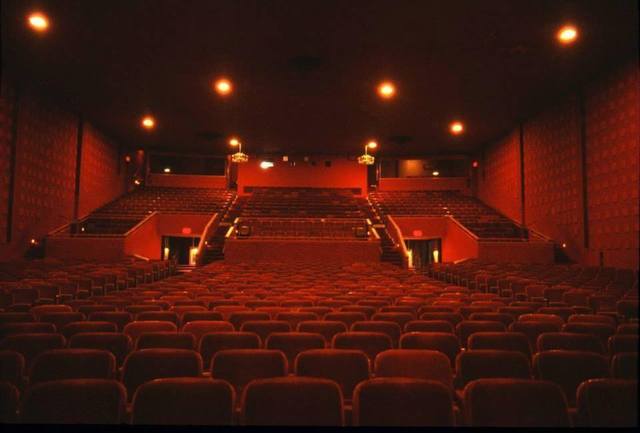 When it opened May 23, 1951 with Spencer Tracy in “Father’s Little Dividend”, it was the beginning of the television era, and the 1,300-seat Terrace Theatre in Robbinsdale was the first (and largest) suburban movie house to be constructed in the Minneapolis area since the end of World War II. It was also the final indoor movie theatre to be designed by architectural firm Liebenberg & Kaplan. It was opened for Sidney and William Volk (who also operated the Riverview Theatre, Nile Theatre and Camden Theatre) at a cost of over $600,000, one of the most dramatic and elegant movie palaces built since the 1920’s in the Twin Cities.

The Terrace Theatre was built on a small hill, overlooking a sprawling landscaped area, with a huge parking lot, with room for more than 1,000 cars. The International-style theatre’s exterior was made up of a series of rectangles, with the only vertical one serving as a tower-like marquee, topped by the theatre’s name in bold letters, visible from both highways the theatre sat between.

The Volks spared no expense in making the Terrace Theater the most luxurious, comfortable and up-to-date theatre in suburban Minneapolis-St. Paul. Like the palaces of two and three decades before, it contained a good-sized auditorium, sweeping foyers, a large lobby space, but with the casual look of an upper-middle class 1950’s home, complete with a sunken “garden style” lounge containing plant boxes and a huge copper fireplace. Overlooking the rolling lawn outside on the far end of the lobby was a wall of floor to ceiling windows.

One unusual and very popular feature of the Terrace Theater was its television room, complete with sofas, chairs and a large color television. It was common for husbands and fathers to watch a ball game here while their wives watched a romantic tear-jerker or their children the latest Disney offering.

In the 1970’s, the Terrace Theater had 70mm equipment installed, and became one of the best of the suburban theatres to see the big action-filled blockbusters of that decade, which were better appreciated on a huge screen.

On December 23, 1988, the Terrace Theater was triplexed. Unfortunately, this rare 1950’s movie palace has been shuttered since 1999, its fate was decided after a local campaign failed to prevent it demolition which came on October 1, 2016.

Right, it opened 5/23/51 as “America’s Finest Theatre.” Not a hollow claim. I’ve made two videos about the last days of this unique (because of its stunning Midcentury Modern architecture) and irreplaceable (because it is now demolished) historic theater and its senseless destruction. You can watch them on YouTube from this link. https://www.youtube.com/playlist?list=PLZBoGqdiur5aSd-rDWHoB4vjPxP-zMu2Z&spfreload=10

I managed to get up to the site before the entire building was razed. Another great movie palace starinf at the wrecking ball. As I walked the perimeter of the site, a person walked up to me and said “it’s a shame.” I agreed. I went on to explain that this was at least the fourth one of these I’ve been connected with that ended up like this. I recalled the Cooper closing and its demolition in the early 90’s. That closing and demolition was similar. In that cade, as with the Terrace, the land was and is a valuable asset for its next use and that value is independent and without regsrd to its past use. Thus the Terrace met its fate.

I upload a photo of the north side of the building showing the start of the demolition. The projection booth can be seen in the area beyond the removed wall.

Here is the Facebook page and website dedicated to the Terrace. The Faceboook page has recent photos of the salvaged marquee letters.

Thanks, David. Anyone interested should also see the article “Terrace Theatre (Minnesota)” on Wikipedia and the Wiki article on “Liebenberg & Kaplan” (the architects of the Terrace)!

Beautiful full page ad at photo section and below