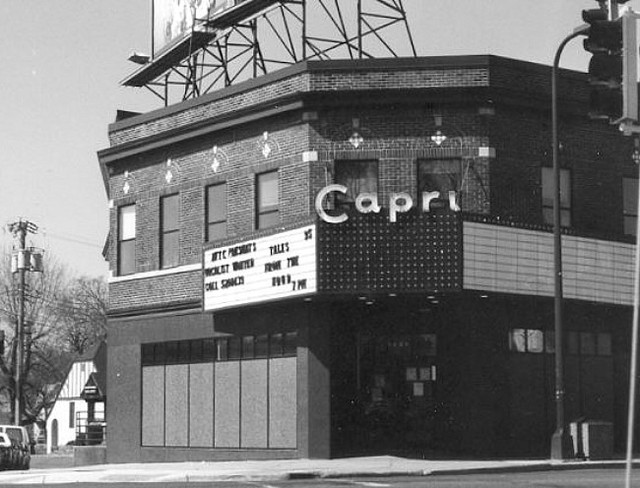 Opened as the Logan Theatre in 1927. It was renamed Paradise Theatre by June 1930. It was renovated in 1933 to the plans of architectural firm Liebenberg & Kaplan. On April 20, 1966 it became the Capri Theatre. It is located on Broadway in north Minneapolis. It has been “re-purposed” and was operated as a dance studio.

The Capri Theatre was reopened on October 3, 2021 as a concert venue & movie theatre.

Thanks to the University of Minnesotaâ€™s Northwest Architectural Archives, we are able to piece together more details about the history of the Capri Theater. Among the papers of the Liebenberg and Kaplan collection: the 1925 ink on linen blueprints for the â€œHerman Jeub Store & Theater Building, Oliver & West Broadway.â€

Eleven linen sheets (20â€ by 24â€) outline the plans for this building created by Henry Orth and Charles Buechner â€¦ architects who in the 1920s designed a number of theater, retail and government buildings in the Upper Midwest.

In 1932 the theater was remodeled by Jack Liebenberg, Liebenberg and Kaplan, Architects, and Liebenberg designed the marquee for the Paradise Theater. The giant sheet metal marquee on West Broadway was designed to have 837 light bulbs â€¦ 21,700 watts total! The letters spelling out the name Paradise used 101 of those bulbs.

The theater has more than 500 seats, and in one variation of the plan second floor offices were to be removed to accommodate a balcony with more than 100 seats. The restrooms were also upstairs, with a larger â€œpowder roomâ€ for the ladies.

The next major renovation occurred in 1965 â€¦ when Liebenberg & Kaplan moved the lobby to the corner of the building at Oliver and West Broadway. There are many sketches of marquees with an updated â€œParadiseâ€ sign â€¦ and among those sketches is one with the name â€œCapriâ€ as it currently exists on the marquee. It appears that the name was changed during the process to move the marquee to its new location on the building.

The retail space was removed from the first floor, and the lobby was expanded â€¦ including a large concession area, mirrored walls and a large light fixture hanging from the lobby ceiling. Inside the theater the orchestra pit was filled in, and the final seating configuration settled at 507 seats.

The next major renovation of the Capri was in 1993 â€¦ when PCYC transformed the building into the â€œCapri Arts & Learning Center.â€ Jafvert, Mueller Architects, Inc., modified the second floor for use as classrooms, including the balcony. The main floor of the theater was also reduced in size to accommodate a dance room. At this time the windows on the second floor were replaced. The windows on the first floor were replaced in 2006.

I recently became the “Director of Capri Theater Development” … hired by the Plymouth Christian Youth Center, owner of the Capri. As we begin planning for a major renovation of the Capri, we are seeking photos of the theater, inside and out. We have only two photos in our possession of the theater prior to 1980. You can contact me at Thank you! -Karl

As a producing, performing, and teaching artist and proud affiliate of the Plymouth Christian Youth Center, I view the Capri as a valued venue for connecting community-based, youth-oriented artists and organizations with the community at large. It has also enabled the artists in our organization, IZORA Productions, to connect with like-minded artists and organizations. Please join us at the Capri on Friday, May 11 and on Saturday, May 12, 2007 (8 pm) for our upcoming arts event, BlackArtsFusion. For more information on the event and on classes, please visit us at www.realartistry.com

My grandfather, Oscar Williams was the projectionist at the Paradise Theater. I’m interested in knowing whatever I can about the theater and it’s history.

This web page says that the Capri opened in 1927 as the Logan Theatre and was renamed the Paradise after a renovation in 1933.

The Federal Cement Tile Co. of Chicago published a promotional booklet in the 1920s featuring photos of theaters that had roofs made of the company’s materials. The caption for the photo of this house (bottom of this page) calls it the Logan Theatre.

Grand opening ad as Capri from April 20th, 1966 in the photo section.