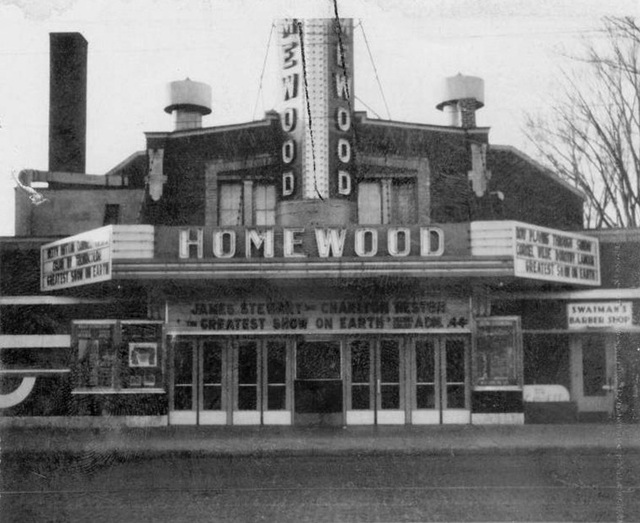 The Homewood Theatre was opened October 25, 1924 for S. G. Lebedoff, and sat about 1,200. It originally housed a Wurlitzer organ and a live orchestra accompanied the opening film, “The Woman on the Jury”. When Finkelstein & Ruben acquired the Homewood Theatre in the late-1920’s, they thoroughly remodeled it at a cost of around $25,000, turning the auditorium’s decor Atmospheric, with arched “windows” on the side walls, each with its own view of the “courtyards” painted within. The Homewood Theatre began showing sound films in 1928.

In 1953, the theatre closed, and was thereafter used as a furniture auction house. After almost a decade, new owners purcashed the old theatre and attempted to bring it back to life with a mix of movies and live stage acts, with Peter Nero appearing on opening night. However, this venture was not successful, and the theatre closed within the year. It has since been torn down.

Here is a picture of the Homewood from 1950-

Motion Picture News of December 22, 1928, reported that the remodeled Homewood Theatre would open the following week.

This opened on October 25th, 1924 Ad in the photo section or