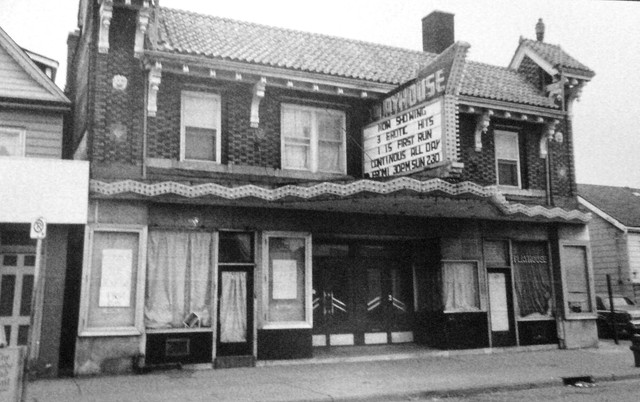 Opened in November 1913 as a working class cinema, with a small stage (and fly tower) for vaudeville. The Playhouse was the second Hamilton theatre opened by Frederick Guest.

In 1946 the auditorium was the site of the vote for the STELCO steel strike by Local 1005.

After the demise of Terra Nova, the building was purchased from the city of Hamilton in 1993 by City Kidz Ministry, a church with a focus on inner city youth.

This is the most intact extant cinema of its vintage in Hamilton. City Kidz has maintained the building very well.

The photo above shows the Playhouse soon after City Kidz took over the building. The tiled roof (just like the one in the Main/Cinema pictures) was replaced with ordinary shingles. The marquee was repainted and the neon and lightbulbs were replaced. I recall a concert was given by Ian Thomas (brother of Dave Thomas of SCTV, etc.) as a fundraiser. All the neon and lightbulbs have since been removed. Why? I don’t know. I hope they aren’t going to remove the marquee. It is the last original marquee in the city. I’m guessing it dates from the 1940’s. The house seen in the Google street view has been torn down and is used a parking lot, mostly for the buses.

Comparing the photo and the Google street view, you can see the changes City Kidz has made to the facade of the building. After Theatre Terra Nova failed and vacated the theatre, it was put up for sale by the city for $60,000.00 (c. 1991-2). It had the original paint job on the marquee. The letters for the sign board were original and had a very unusual font style. The display windows and the box office (at the right side of the entrance) still existed.

I was hanging around the theatre, taking pictures and a real estate agent showed me around inside. The interior is ornate, and I remember light bulbs around the stage procenium (arched, I think). A sound and lighting operation area was set up in the rear seats in the auditorium. There were two apartments on the second floor and the projection room was across the hall. There were a few projector parts on the floor of the room, and there was a board with the marquee letters and numbers (in alphabetical/numerical order) hanging on nails. In the basement (under the stores) there were old movie posters for Italian and soft-core porn movies, still there after all those years since the theatre ran them. For a time, the Playhouse ran Italian films. There used to be a sign advertising the Italian film policy on the upper South side of the building. The theatre showed soft-core pornographic movies until it closed and was then taken over by the theatre group.

For most of the 60’s and 70’s the theatre showed all Italian language movies.

Multiple photos in the below website about the closing.