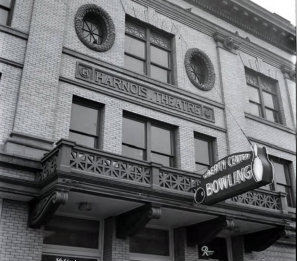 Built by Charles Harnois on Main Street in 1909 as the city’s premier opera house, presenting light opera and vaudeville acts, the opening show was on February 25, 1909, “Brewster’s Millions”. In 1914, Harnois sold the theater, which was renamed the Missoula Theater. By 1922, the theater had been acquired by the Northwest Theater Company, and the name was again changed, to the Liberty Theater.

By this time, it had become a motion picture theater. In the late-1920’s, it was part of the Hanson-Simons chain. In the early-1930’s, the Liberty Theater, along with the Rialto Theater and Wilma Theater, were part of the Fox Theaters chain. By the early-1940’s, the theater had closed.

It was operating as the Liberty Bowling Center by 1943 (the name changed to Liberty Lanes by the mid-1950’s). The building was demolished around the mid-1960’s after the Liberty Lanes moved to a new location. The site of the theater became a parking lot.

The Harnois Theatre, Missoula’s premier opera house, was designed for Charles Harnois by architect A.J. Gibson with the interior décor completed by the Twin City Scenic Studio. There were three floors with nine exits and a 58-foot wide, 35-foot deep and 65-foot high stage. Shortly after it opened, Elizabeth Gurley Flynn and Jack Jones of the IWW (the “Wobblies”) rented the Harnois' basement for rallies. Charles Harnois sold the Harnois Theatre in 1914, it was renamed the Missoula Theatre, and at some time between 1922 and 1925 the name was changed to the Liberty Theatre. By 1929, the Liberty was listed as a “Hanson-Simons Co.” property. By 1932, the Fox interests became involved with the Liberty and the Wilma and Rialto as well. At some point between 1938 and 1941, the Liberty Theatre closed, and by 1943, the building was listed as the Liberty Bowling Center in the city directory and to Liberty Lanes in the 1950s. When Liberty Lanes moved to another location in the 1960s, the building was razed for a parking lot. The remains of the brick eastern wall of the theatre are still visible on the east side of the parking lot at 211 E. Main.

This opened as Harnois on February 25th, 1909. articles, ad and pictures at