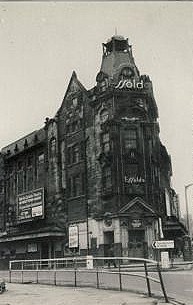 Located in the centre of Gateshead, Tyne & Wear, at the corner of High Street and Sunderland Road. Plans were proposed in September 1904 to build an Alhambra Theatre of Varieties, but it was opened on 9th October 1905 as the King’s Theatre. Designed by architect Stuart M. Mold, it had a Spanish Renaissance style exterior in heavily carved red and white stone. The entrance lobby had a barrel shaped ceiling and Spanish tiled walls Inside the 2,000-seat Art Nouveau style auditorium, seating was provided in orchestra stalls, dress circle and gallery levels. The proscenium was 28 feet wide, the stage was 42 feet deep and there were ten dressing rooms.

Initially it was independently operated, and failed to get the best shows, which were reserved for the main circuit theatres operated by Stoll & Moss. The King’s Theatre was screening short films as part of the variety programme by 1907.

In 1915, it was taken over by Richard Thornton, who owned a chain of variety theatres and he had teamed up with the Moss Theatres chain, therefore the King’s Theatre began to receive better productions on its stage. It was re-named Empire Theatre in 1918.

Films were occasionally screened in the 1920’s, and in October 1921, a projection box was built at the rear of the stage. In 1932, talkie equipment was installed. The Empire Theatre closed as a variety theatre on 15th May 1933 and it was re-opened as a repertory theatre on 5th March 1934. It then continued as a live theatre with occasional weeks of variety until after World War II.

The Empire Theatre was taken over by the Newcastle based Essoldo cinema chain in August 1946, but continued as a variety theatre until 1950. A new projection box was built at the rear of the gallery, and from 30th April 1950, it was re-named Essoldo Theatre, screening its first feature length film “Bomba” starring Johnny Sheffield on 1st May 1950. The gallery seating was not used again, and the seating capacity was reduced to 1,087.

The Essoldo screened the first 3D film in Gateshead, a featurette entitled “A Day in the Country” on 27th April 1953. The feature western “Fort Ti” starring George Montgomery was screened in 3D from 26th October 1953. The Essoldo was the first cinema in Gateshead to have CinemaScope installed, opening with a film of the Royal tour “The Flight of the White Heron” from 28th July 1954, followed by “The Robe”, “King and I” and “Three Coins in the Fountain”. Stage facilities were retained, and the last professional stage show was the Christmas pantomime “Jack and the Beanstalk” starring Sandy Powell in 1965. Local amateur group hired the theatre several more times.

The Essoldo building was then in the way of a new viaduct to be built for the A1 road, and it was closed on 30th December 1967 with Rod Steiger in “Al Capone” and Laurence Tierney in “Dillinger”. It was demolished in early-1968. Today, part of the site is occupied by an office block named Computer House.

Here is a picture of the theatre when it was the King’s Theater; one from sometime in 1949-50, a rear view, and a demolition photo.

I have uploaded a photo of the Essoldo (Empire) seen from a busy Gateshead High Street in the early 1960’s. The ABC Ritz tower can be seen in the distance. Both these cinemas were demolished in the late 1960’s to make way for a new flyover which, in the event, did not touch either site. The Odeon was just forward of the spot from where this photo was taken and the management there hoped that with the ABC and Essoldo out of the way business would increase there – well, it did not work out that way…….