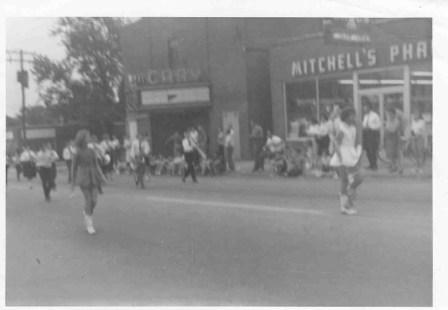 The Cary Theater was the city’s first indoor motion picture theater and opened in 1941. After its closing as a movie theater in 1960, it was used as a clothing store, as a recording studio, and as an auto parts store.

The City of Cary incorporated the former theater into a new community arts center, with new construction immediately adjacent to and also within the theater. The new facility, which serves a variety of cultural and performing arts functions,has flexible seating, a balcony, and projection facilities. A new marquee is of a design reflective of the era of the original theater’s construction. It was reopened February 14, 2014.

A video about the construction project that includes some historical photos of the Cary Theater can be seen here.

According to one of the articles about the Cary Theater from the December 2,2012 edition of the Raleigh Sunday News and Observer:

It states that the Cary Theater opened somewhere around 1941 and closed in 1960 when the theater was converted into a clothing store and later on an Auto Parts store.

Added two additional pictures I took on 1 November. Slow but steady progress being made on the renovation.

I have added photos to this site since around July 2013. The latest are various photos from the theatres use as a retail business other than a theatre. Also included are some photos I mentioned having taken in Nov 2013. As of this posting, the Visual Art Cen is due to open in march.

I have found the grand opening advertisement from 1941 and will be revised for the Cinema Treasures site.