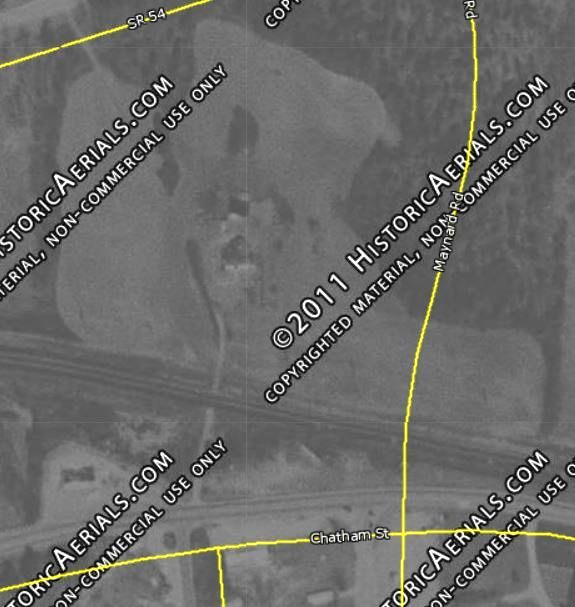 I emailed the library and here is the answer:

“I believe we have found a little more information on the Car-Ral Drive-In Theatre. According to an advertisement from the Raleigh News & Observer from August 1st, 1948, the location of the theatre was "US No. 1 South Opposite WPTF Towers”, which are near East Chatham Street in Cary today, just south of what is now NC 54 (if my geography is correct, which is often a shaky proposition) . Another article from the News & Observer of May 18, 1952 has a picture of the damage done by heavy winds ,forcing the drive-in to close temporarily. An ad from the October 15, 1953 News and Observer shows the theatre having reopened as “South #1 Drive-In Theatre”. The fact that the new name is a reflection of the location of the Car-Ral’s location leads me to believe that they were the same theater."

In looking aerial from 1964 (bad picture and TOPO maps show nothing)there is something showing. Since it was a small DI maybe that is it??

Hi, If you need info on this Drive-in, I can give you a complete history and all her dirty little secrets, because I grew up and lived at this place until I escaped in 1963. The drive-in closed in 1963, not 1975. Maynard Road did not exist then, it sat on the south side of Hwy 1/64 which is now called Chatham St. It was owned and operated by a pedophile named J.T. McSwain who died in 1975. The drive-in was converted into a trailer park which is still there in 2015. Below is a short story of the wonderful/terrible place.

This comment is posted in reference to posting by member eburleso posted on this site referencing movie theatres across the United States. His comment was dated April 23, 2015 and reflects on his knowledge of the Drive-in movie theatre in Cary, North Carolina and its owner, J. T. McSwain.

I found the writings of the author to be extremely knowledgeable, personal and precise. I, too, had met J. T. McSwain, only once in my life, at the personal request of Edward Spirn Burleson. It was in the latter part of the 1960’s.

I am a website designer and I often research various articles on many topics. I came across this article in my research and realized, after reading it several times, that I actually knew the parties involved. You see, I was married to the author in the late sixties. We went our separate ways, and I moved to the State of New York and never heard from him again.

After so many years, I often thought about what happened to him. I never knew, nor did he ever convey to me, the turmoil that he had experienced at the hands of this pedophile. He kept it, as his article references, a deep dark secret. Those times are almost 50 years now. What a dark shadow to live through and carry throughout anyone’s life. What I read in his posting has given me, finally, an understanding of who he was when I married him. I wish him well.

I am in hopes that the author, who so intimately shared his re-visit to the trailer park and movie theatre, has a certain peace of mind, after physically standing in front of the buildings and

The 1964 aerial shows no indication of a drive-in at the location. I understand that the drive-in may have been closed and demolished. But unless it was quite tiny, the problem with it being the trailer park is all the trees that are seen in the 1964 aerial.

You can raze a drive-in to the ground, but trees take several years to get to be that size. So, unless it was like a 50 – 75 car drive-in, I’m going to need more information on where it was located because an aerial one year after closing should show it even if it became a trailer park.