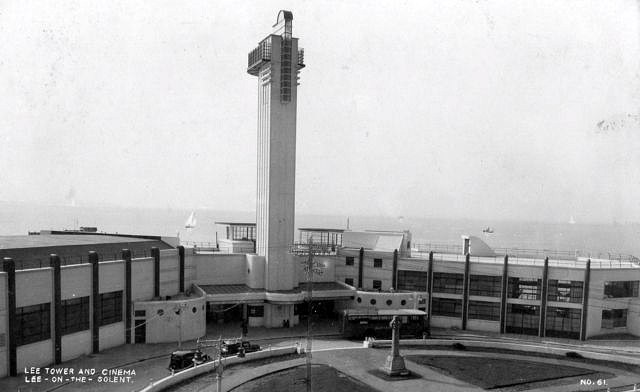 Located in Lee-on-the-Solent, near Gosport, Hampshire. The Tower Cinema was on the sea-front in the centre of town. It opened on 26th December 1935 with Sonny Hale in “"Marry the Girl” and “In Town Tonight”. This splendid building had a 120 feet high tower as its main external feature. Inside the 845-seat auditorium, the proscenium was 45 feet wide, the stage 30 feet deep and there were three dressing rooms. The cinema also had a cafe attached.

It was initially independently operated, and by 1939 had been taken over by the local Council. At the outbreak of World War II on 3rd September 1939, the Tower Cinema, like all other cinemas in the United Kingdom was closed. The Tower Cinema was immediately requisitioned by the Ministry and Military.

At the end of World War II in 1945, it was de-requisitioned, and re-opened as a cinema. It was equipped to screen CinemaScope films in 1955, but the Council closed the Tower Cinema in 1958. It became a bingo club, and bouts of all-in wrestling were held on certain nights. It was later converted into a ten-pin bowling alley.

The Tower Cinema was demolished in 1968, and the site is now used as a car park.

A photo of the theatre’s signage can be seen here.