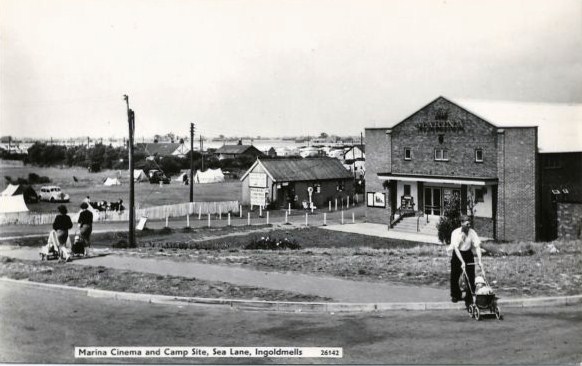 Located in the seaside village of Ingoldmells, five miles north of Skegness, Lincolnshire. The Marina Cinema was opened on 9th July 1957 with Abbott & Costello in “Bring Your Smiles Along”. It was independently operated. It had a raked single floor, and seating was second-hand from the former Chantry Cinema, Grimsby.

In 1962, it was re-seated with second-hand seats from the Empire, Leicester Square, London.

In the late-1960’s it began to operate during the summer months only. It was refurbished after the close of the summer season in 1974. The Marina Cinema was closed on 25th September 1976 with Grahame Chapman in “Monty Python and the Holy Grail”.

It re-opened in May 1977 as a full time bingo club. In 1980, an extension was built at the rear, increasing the capacity of the bingo club to 550. The bingo club closed in January 2000. The building was sold and converted into a supermarket.