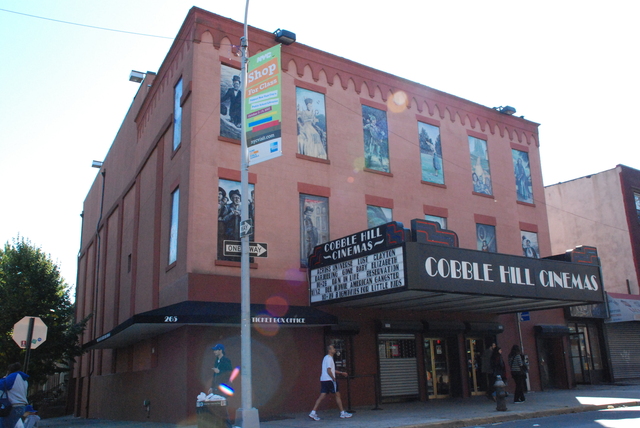 Opened prior to 1926, the Lido Theater had 550 seats. It stands on Court Street and Butler Street in the Cobble Hill section of Brooklyn. Still operating as the Lido Theater in 1957. It became a double-feature neighborhood theatre into the 1960’s when the neighborhood changed. It was also known as the Rex Cinema in the early-1970’s.

It opened and closed a few times, showing kung fu and action fare. When the neighborhood became hot again, the theatre reopened as the Cobble Hill Cinema. It showed first-run fare. The theatre was an instant success and on September 24, 1982 the owner twined the theatre, then on March 25, 1988 it was triplexed and finally on July 19, 1991 built two new theatres on the roof, making it a fiveplex. The interior was redone, and the theatre continued to show a mix of first run, foreign and independent fare.

Clearview Cinemas took it over for a few years, but when Regal opened the Court Street 12, it tried to show foreign and independent films exclusively there and lost a lot of business. Soon Clearview wanted out and the theatre was again taken over by its previous owner, who returned to showing first run films in addition to the mix of independent and foreign films.

It is still operating, serving Cobble Hill’s movie needs. The one downside of the theatre is that it has a tiny lobby, forcing patrons to stand on line outside, no matter what the weather is.

Was there for the first time on Sunday to see Frost/Nixon. Small theatre, the line outside, yep. The “main” theatre inside is quite small but has a high ceiling. We had to truck it up 2 flights to our theatre and it was quite cramped. The seats were bucket seats like in a coupe and didn’t recline, rather they were oblique to begin with and my rather large legs had no room at all.

Here is an eye-popping, two-sided handbill for the Lido Theatre circa 1937. The Hurricane was playing. One side is in full color. I think this item is for sale on ebay. View link It’s really cool.

I will always remember it as the Lido, @Iamma9… was your mom the matron up to the 60s or just early 50s? as a kid going to Sat. matinee we would drive the poor matron nuts(Sorry if it was your mom). my mom and grandmother knew Louie Cohen, in the days(mid late 40s-early 50s)with much less traffic in the street my irish setter would roam the street even being crossed by a cop at times. he would make a stop outside the Lido and relieve himself on the tri-angle ad in the street showing coming attractions, Louie would asked my grannie to tell my mom please dont let your dog piss on my sign as its turning colors. my grandmother would always sit in the back row of the Lido and talk to the screen, we seen many double features in the 50s/60s for 25 cents and Sat.

When was it built? Any photos of the original interior? I went there today to see Victoria and Abdul. Interesting little place. I’ll be going back since the early movies are 9 bucks.

In anticipation of Halloween, the Cobble Hill is among venues participating in the 2019 Brooklyn Horror Film Festival, currently running through October 24th. Full program and other details can be found here