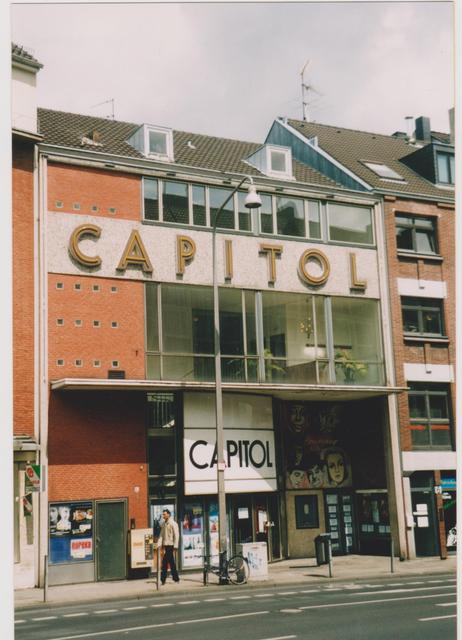 The Capitol Kino is a very distinctive cinema building, which, in a rare case for a cinema in Germany, is Heritage Listed. The Capitol Filmtheater was opened in 1958 and replaced the Capitol Film unf Buhne in Haus Grenzwacht, which was demolished in 1944 by Allied bombs during World War II. It has its own page on Cinema Treasures.

The 1958 Capitol Filmtheater was designed by architect Fritz Eigelshofer and contained 502-seats in orchestra and balcony levels. It was operated by Gaststattenbetriebe Ritter KG. It had a CinemaScope screen with N11 projectors by Baur. A 4-channel stereophonic sound system by Klangfilm was installed The seats were by Schroeder und Hentzelmann. In 1959 it was operated by Mr. & Mrs. Manstein.

In 1987 the Ufa chain took over and the Capitol Kino specialized in high-level mainstream movies and arthouse films. It was closed in 2004.

Hans Peter Coenen re-opened the Capitol Kino, but it closed again in late-2013.

In 2014 the Capitol was renovated to the plans of architect Brit Schneider and re-opened as the luxurious Capitol Lounge Kino, operated by Leo Sturtz. He also runs the Cineplex Aachen and the Eden Palast (both have their own pages on Cinema Treasures). The seating was reduced to 41 in the orchestra and 83 in the balcony levels. The Capitol Lounge Kine presents only one show a day. In front of the stage is a large lounge bar and the audience can order their finger food too. The bar is open while the pre-programming is running. After the 20 minutes pre-pregramme is an intermission of 10 minutes for the last orders at the bar. The featurs film is then screened. Once the film is over, the bar is open again and Lounge music is played. The moviegoers love to stay a little bit longer at this nicely designed cinema.