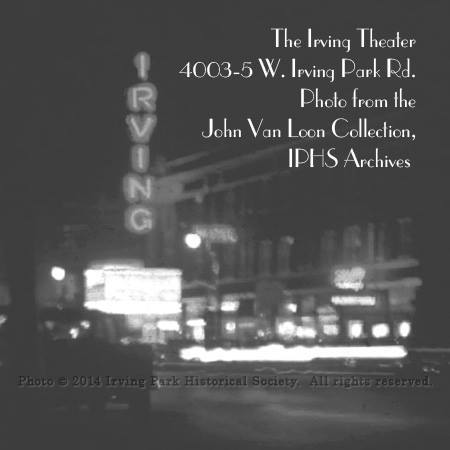 Opened September 1, 1917, at the corner of W. Irving Park Road and N. Pulaski (then Crawford) Road, near Independence Park, the Irving Theatre survived until around 1970 before closing, and was demolished sometime later.

It says “IRVING THEATER PROPERTY”. So obviously the building was named after the owner, and not the theater.

Just to confirm, Pulaski becomes Crawford Ave. in Lincolnwood, North of Devon Ave. I think Pulaski is 3600 West.
The City of Chicago is who renamed Crawford Ave. after Casimer Pulaski. So it remained Crawford Ave. North of the city.
Irving Park Road or Blvd. is 4000 North.

(I now reside at Stateville CC)

The theater was in the Race Hotel, a large, residential hotel that also housed Andie’s Candies and a restaurant. I’m not sure what name is most correct, but it was more known as “Race Hotel” than “Race Theater building” in the neighborhood.

Although the address is a little bit off (I believe Chicago shifted some addresses in the late 1910s-early 1920s) an item in June 17, 1916, issue of The American Contractor could be about the theater that opened as the Irving. It was a three story hotel and theater building for A. Y. Race, at 3946-3956 N. Crawford Avenue. It was 132x175, and was designed by architect Jeremiah J. Cerny. Cerny was also the architect of the Essanay Studios, where Charlie Chaplin’s early movies were filmed, and which is now a designated Chicago landmark.

Going Tuesday 3/6/2018 in Cedar Rapids, Iowa to see an old Vincent Price movie Last Man on Earth. His daughter will be at the showing. Saw the movie the first time in the spring of 1965 at the Irving Park Theater in Chicago at the cost of 25 cents.

As I can recall, after the theater was sold and demolished, a Mobil gas station was built there. I can remember they had a new style of gas pumps. They were round, like a cylinder.

This was likely an early John Eberson work, as the American Terra Cotta Index notes for this building, “Records list both Cerny and Ebertson”. Eberson likely handled the theater portion of the building.