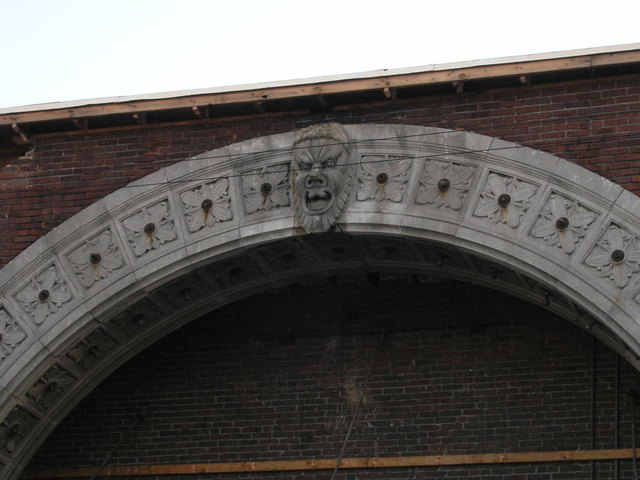 Opened on March 31, 1923, the Rivoli Theatre served the neighborhoods of Old Irving Park and Mayfair for decades. The theatre stood on N. Elston Avenue at N. Keystone Avenue, not far from W. Montrose Avenue. It was closed in December 1949. By April 1950 it was operating as the Rivoli Ballroom and it later became a banquet hall.

Since the early-1980’s, the former Rivoli Theatre has housed the Muslim Community Center, which includes classrooms, a bookstore and worship space in the auditorium.

I visited here today. The auditorium is well-intact aside from the leveled floor and pushed-in back wall. The MCC seemed to indicate that they moved in during the early 1980s; it seems to have functioned as a ballroom and banquet hall for some time after the 50s. The auditorium also features acoustical ceiling tile from the 30s arranged in an interesting deco pattern. The MCC is very friendly and welcoming. I have some pictures I hope to post soon.

Here is part of a July 1956 article in the Chicago Tribune. I assume the theater was already closed, it they were trying to turn it into a warehouse.

ZONING BOARD OK’s THEATER AS WAREHOUSE
Neighbors Complain of Noise

A zoning variation to allow a plastic toy warehouse to operate in a former theater building at 4380 Elston Avenue was approved last week by the city zoning board of appeals.

I added another pic today. Unfortunately the original face at the top of the arch was jackhammered off within the last week. As I mentioned under the photo, less work would have likely been needed just to remove the entire stone. And sell it to help fund their exterior renovation. Which I was told last week by folks outside was going to be “restored”.

In the 1960’s, the building became The Rivoli Ballroom.

I could be wrong, but I believe it was also used for banquets before or at the same time it had Ballroom dancing. I do recall my Uncle once going there trying to secure a location for a bowling banquet.

I do know for the Ballroom Dancing events, The Original Marquee and vertical RIVOLI sign were once again lit up and used to promote the dances. The same bands that performed the over 30 dances at the Embassy and Milford Ballroom began performing here.

I don’t know how long this operation lasted but I remember the facility was closed again before it became Antoine’s Ballroom and Banquets. The Main auditorium was kept intact for Large parties, and the remainder of the stores in the theater building became smaller Banquet Halls.

Antoine’s eventually closed and I can only assume it was because of lack of available private Parking. I performed several Weddings and parties there, and I can assure you first hand…parking was a NIGHTMARE.

As mentioned above… since the early 1980s, the former Rivoli has housed the Muslim Community Center.

Opened Saturday March 31, 1923. Ad in Chicago Tribune is small and doesn’t list the movie shown. First ad to name a movie was April 2, 1923 and I added it to photo section.