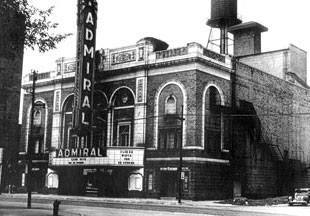 The 1,500-seat Admiral Theatre opened on March 31, 1927 with Helen Chadwick “Stolen Pleasures”. It was a showcase for both vaudeville and motion pictures. It was equipped with a Marr-Colton 3 manual 10 ranks organ. On January 1, 1942, the theatre was acquired by the Balaban & Katz chain.

By the mid-1950’s, the Admiral Theatre was closed due to declining business. In 1969 it reopened its doors, strangely enough, screening only cartoons, with admission for a quarter. Predictably, this venture didn’t pan out, and within a couple months, closed.

In 1971, the Admiral Theatre reopened again, this time showing pornographic films. In the late-1980’s, the theatre received a makeover, and restored some of the original décor. About the same time, the focus of the Admiral Theatre went from films on the screen to live entertainment, and received the more proper designation as a “gentleman’s club”, as it remains today.

We were here in 1991. A rare appearance by Rockford Illinois' own Ginger Lynn. (It’s important to support hometown talent ya know).

The first floor had a DVD & “toy” store behind a rather large raised ticket & cashier counter. It had turnstyles to access that area. The DVD sales area was raised up a few feet higher than the initial lobby floor.

Behind that was a giant showroom, obviously the old auditorium. Accessed by hallways on either side. Though management steered patrons to the right as recall.

You could see original plaster work up around the 2nd floor windows in the lobby. Areas that were painted purple & silver. Those windows faced Lawrence Ave. Supposedly there were video booths on the 2nd floor.

The showroom was mostly black or purple as I recall. So the stage was really the focal point. You could tell a lot of money was spent whenever they had remodeled previously.

I was just helping a good friend of mine organize all of the Admiral Theater’s 35mm film prints in their projection booth (yep, the booth and projectors are still there…as are the 70+ 35mm porno films ranging from 1969 through 1983). It was a blast! There are about twenty balcony rows still there before a wall begins (which is where the balcony video booths are). Beyond that, down below, is the showroom with the strippers, which takes up a large portion of the auditorium. It’s amazing for me to write this, but when looking out of the windows in the projection booth, over the ceilings of the video booths and showrooms, at the very end of the theater in darkness is the curtains and presumabely the movie screen…completely intact! I’m going back soon to snap a few pictures which I will gladly post for anyone who is interested to see!

Drove by yesterday, the Admiral has re-done its entrance in a more sympathetic way – more of the terra cotta is now exposed and a lot of that EFIS stucco is gone.

The Admiral wins an award for being a good neighbor.

The Admiral theatre opened on March 31st, 1927 with “Stolen Pleasures”.