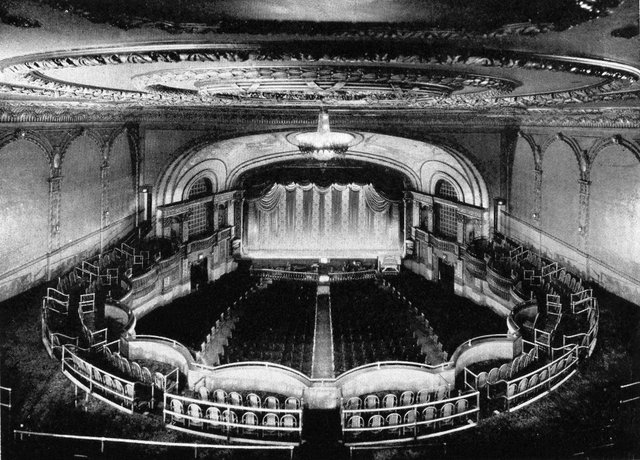 Opened in 1925 for the Ascher Brothers circuit, the Drake Theatre was taken over by the Balaban & Katz chain in 1942.

It was located in the Ravenswood neighborhood, near the intersection of W. Montrose Avenue and N. Drake Avenue. It had a narrow tall arched entrance, with the bulk of the auditorium hidden behind a block of apartments and retail units which were built at the same time as the theatre. Immediately to the left of the theatre entrance was the Drake Bowl in a separate building.

The Drake Theatre was closed in 1951, and demolished in 1970. The site of the theater is now a parking lot, although the apartment/retail block still stands. The bowling alley lasted into the mid-2000’s, but has since been demolished.

Yeah, looks right to me. Odd that they tore down the lobby section though, in most situations like this they seem to just send the cars straight through it.

Here’s a photo of the Drake in 1967, from BusTalk.net: View link

Pretty cool. Wonder what they were using it for at the time?

You can also see half a sheild at the top of that column, the last remnant of the terra cotta.

Drake Bowl is also gone, having been replaced by a multistory condominium building.

On another note, does anyone know if the building at 3630 West Montrose was a theater or ballroom? Sure looks like it.

thanks mp775 for providing the link to a photo of the theater . The gallery is centered around buses but it is loaded with great photos of Chicago neighborhoods and intersections in the late 60’s.

I used to bowl at Drake Bowling alley when I was a kid in the mid 70’s. In the late 70’s The owner of the bowling alley name was Matt and his daughter’s name was Barbara. I don’t think the lot next door was technically the lot for the bowling alley. I know the owned lot was west on Montrose and on the South side of the street. It had a sign that sadi parking for Drake bowl.

I remember the theater building but mostly because of the store fronts. I was never in an area I would recogize as a theater. One of the stores was a beer can collector store. He didn’t have a lot of beer cans, now that I’m older I have no clue how he stayed in business.

I forwarded the link photo to a friend of mine last night, who lived in the neighborhood and worked / lived at the bowling alley. At one time he was in 7 leagues in a week.
He told me that there was a rumour in the neighborhood (in the 70’s)that the buildng’s basement had been sealed off during remolding and that many films remained in the basement.

I don’t understand the post from above about a “radar that picks up on theater buildings” by Life’s too short but it might be possible that there is a small treasure under that parking lot.

Geraldo time to dig out another vault

Three new theaters have joined the Balaban & Katz chain. All are locatd on the Northwest Side and have been under the B. & K. banner since the first of the year. They are the Portage at 4050 Milwaukee avenue, the Admiral at 3940 Lawrence avenue, and the Drake at 3548 Montrose avenue. All three are now undergoing minor operational transitions and will offer the latest cinema advantages to neighborhood audiences.

Here is a photo of the new drake

Hi Mp775 could you please repost the link of the Drake in 1967? I tried the above link but it didnt work.
Thanks!!
Becky

See BWChicago’s post right above yours. It was the same photo.

Wow no comments in almost 3 years.