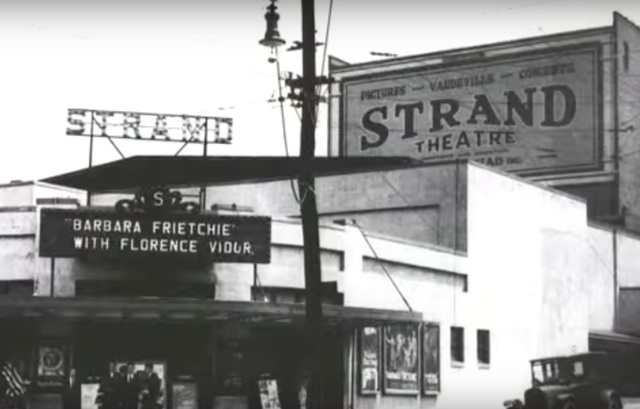 Located at the corner of NE 9th Street & Spring Street. The Strand Theatre was opened February 21, 1920. By 1941 it was owned and operated by Goldman Theatres of Philadelphia. It was a fairly large theatre with a balcony, and had a huge wrap-around neon lit marquee. For years it was a neighborhood double feature second run house.

In around 1968, Goldman began to program first run features. In 1970, the Strand Theatre was badly damaged in a fire, which occurred around the same time as a fire which destroyed the Embassy Theatre in downtown Reading. The fire at the Strand Theatre was set by three kids, and it possibly never reopened. In 1972 the property was sold to Budco, however, it was torn down and replaced by a restaurant.

A January 9, 1926, article in the Gettysburg Times listed a number of theaters recently completed, under construction, or under contract that had been designed in the office of Philadelphia architect William Harold Lee. Three houses were listed at Reading: the Colonial, the Strand, and a house called the Penn Street Theatre. All three projects were for Carr & Schad. I don’t see a Penn Street Theatre listed, so maybe it’s missing or it operated under a different name.

The Gettysburg Times was probably using the word “recently” rather loosely. I’ve found references to the Strand Theatre dating back to 1919. The January 24 issue of The Film Daily noted that Carr & Schad had purchased a lot at Ninth and Spring Streets in Reading on which they expected to begin construction of a new theater by April 1. The earliest listings I’ve found for the Strand in the Reading newspaper appeared in late March, 1920, so the project might have suffered some delays, but the Strand was definitely open by 1920.

Carr & Schad Circuit launched the Strand Theatre on February 21, 1920 with “The Valley of the Giants” along with Charlie Chaplin’s “A Day’s Pleasure.” Audiences were wowed by the 3-manual Mohler pipe organ. In July of 1928, the Arcadia’s Vitaphone sound system was moved to the Strand to accommodate the larger than anticipated crowds for talkies.