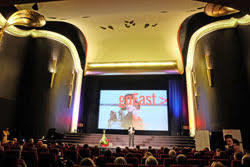 The Caligari FilmBühne is Wiesbaden’s municipal cinema and is among Germany’s most beautiful traditional cinemas. The cinema opened in 1926 as UFA FilmPalast am Park and represented an example of the cinema palaces of silent-film times. In recent times, the cinema was bought by the municipality of Wiesbaden and underwent a very tasteful restoration in 1999/2000. The cinema presents itself today as a gem preserving the form of a huge single-screen auditorium. The cinema’s entrance/lobby boasts a sort of bar/espresso area as can be found also in classic theatres, the auditorium is huge with seats in stalls and balcony sections. The cinema specialises in arthouse films and is host to film festivals.