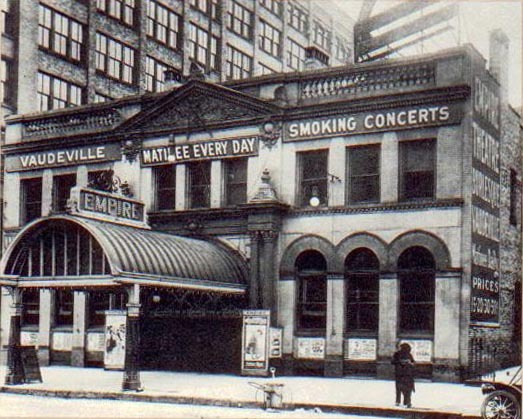 The Empire Theatre was opened in 1900.

The Empire Theatre opened in 1900 as the first house in Cleveland built specifically for vaudeville. Within a few years it had been converted into a burlesque theater. I’ve found references to the Empire operating as a burlesque house as late as 1923, but the building was most likely demolished in 1925, the year construction began on the Ohio Bell Building (now the AT&T Huron Road Building) which now occupies the theater’s site.

I’ve been unable to discover if the Empire Theatre ever showed movies, but IMDb says that it was in one.

Hello, I’ve found a scrapbook in my garage containing memorabilia from this theatre. I would like to send to someone interested in the history of theatre in Cleveland early 1900’s … is there an association I should contact. I’m in California.