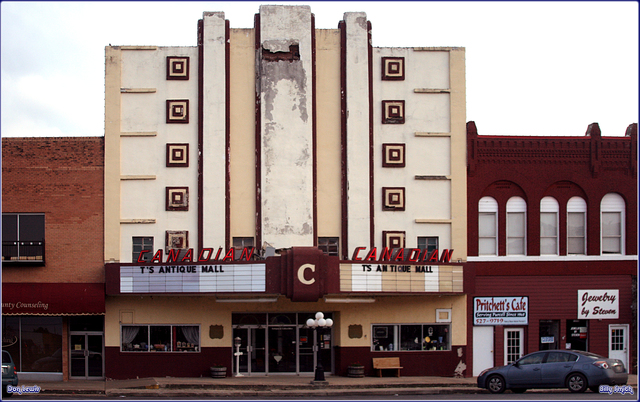 Built in the 1880’s, it became the Opera House in the late-1890’s. In 1922 it was converted into a courthouse. On November 15, 1946 it was converted into the Canadian Theatre, opening with Carl Esmond in “The Catmen of Paris” & Richard Dix in “The Secret of the Whistler”. In August 1947 it suffered extensive damage in an arson attack by an 11 years old child. It was renovated and reopened. It closed as a movie theatre in 1974 and was converted into an antique mall. Its exterior has recently been restored to its 1940’s appearance. By 2016 it has operated as a banquet hall known as the Grand Canadian Theater.

In the early sixties the Canadian was operated by the K. Lee Williams theater chain. This chain also operated the McClain and the Sky-Vue Auto Theater in Purcell at the time.

A 1984 photo of the Canadian Theater in Purcell.

Went in it today; Big place. Still has part of the original curtains (took pics) Interesting color scheme. Kind of a rose color with triangles depicting arrowheads. Also found another, older theater down the street.

The B.H. Rackely Building is a late 19th Century structure that originally housed the city’s Opera House. The building was among the few spared in a major fire on November 19, 1895. It appears to have been taken over by Walter and G.W. Brown who called it Brown’s Opera House and – when motion pictures were coming into fashion – the Browns also launched Brown’s Theatre and the Mystic Theatre dedicated to silent films. With newer movie theaters constructed in downtown Purcell, the opera house hosted live events and basketball games until being converted to the town’s court house in 1922.

Court and other city functions moved elsewhere and eventually Levi Metcalf and K. Lee Williams Theatres purchased the venue and converted it to the moderne Canadian Theatre. The 800-seat venue cost $50,000 to convert and was named after the nearby Canadian River. It opened in December of 1946.

The Canadian survived an arson attack by an 11-year old in August of 1957 that caused extensive damage. Metcalf would launch the Skyvue Drive-In and would be sued by all eight Hollywood studios in 1974 for what they claimed was box office financial fraud. The theatre closed and became an antique mall which – at one point – had the original popcorn popper from the theatre.

I know the chances are slim to none, but would it be feasible to return this building to a moviehouse? It looks so good now on the outside. I see there are no open theatres in this town.

The Canadian Theatre opened with a soft launch on November 15, 1946 with “The Catmen of Paris” and the “Secret of the Whistler.” Levy and Sidney Metcalf then has a formal Grand Opening on November 22, 1946.