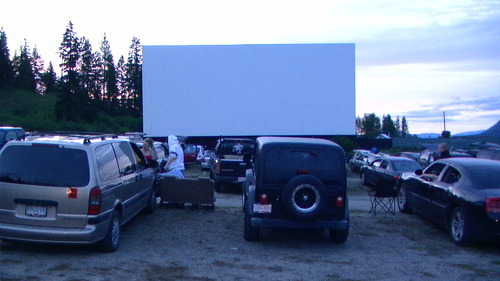 The drive in was opened in 2002 by New Millennium Cinemas. It has been privately owned and operated by the same company since it opened. The Starlight Drive-In has become a beloved summer attraction, and is still going strong.

It’s my understanding this is a relatively new drive-in, built in the mid 90’s. Jay Daulat, who owned the Hillcrest drive-in at the time in Surrey, B.C. ran it for a few years. They converted to digital in 2012, when faced with the fact that film ptint availability would be delayed much longer than usual. After experiementing with furst run movies, they are now back to an off the break booking schedule.

Capacity is around 250 cars, with what might be the first drive-in balcony. Extra space carved into the hillside. The season runs from May to late September. Screen tower is 50' high by 125' wide.

This YouTube video relates how in the early 2000s, projectionist Paul Lindquist “noticed a run-down, abandoned movie theater,” found a couple of partners and “re-opened” the place in 2002.

“When we first came to the property, there was a 1963 Century projector, one of those workhorses of the film industry,” Lindquist said.

So there was some sort of dead drive-in here before Lindquist and friends revived it. My 1976 IMPA doesn’t list anything for Enderby and no “Starlight” (but several “Starlite"s) for British Columbia. After that, the "International” MPAs stopped including Canadian drive-ins in its lists.