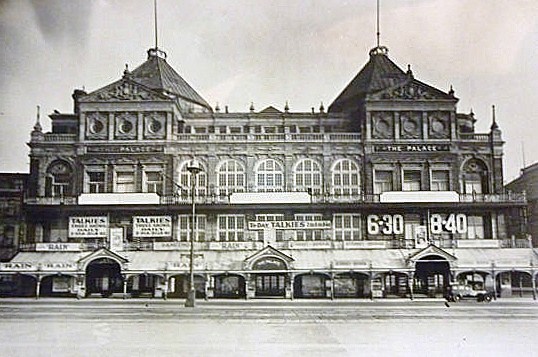 Located on Blackpool’s famous Central Promenade, adjacent to, and to the north of the famous Blackpool Tower Building, which was built in 1894. Originally on this site was the Prince of Wales Theatre, Market & Baths, which were demolished in 1897. A magnificent new purpose-built entertainment building was built on the site, named the Alhambra which opened on 22nd May 1899. Inside the building was a 1,200-seat Circus (to rival the Tower Circus), above the circus was a huge ballroom (again to rival the Tower Ballroom), a 3,000 capacity Palace Variety Theatre with seating on four levels, a restaurant and a café. The entire complex was designed by the architectural firm Wylson & Long, who were well known for designing theatres. Films were soon being screened in the building, but the owning company went into liquidation in 1903, and the building was taken over by the adjacent Blackpool Tower Company in July 1903. The interior was re-designed by noted theatre architect Frank Matcham and it was renamed Palace, advertising itself as ‘The People’s Palace of Pleasure’ and reopening in July 1904.

In 1904, the ballroom was converted into a Panopticon, and films were part of the programme. In 1909, Vernon’s Bioscope was installed and it was re-named Palace Pictures. It operated as a cinema until 1911, when it reverted back to use as a ballroom. From 1911 a new cinema was created in another part of the building which had previously housed the Circus, and with seating for 1,972, it was named the Palace Picture Pavilion. It was equipped with a Western Electric(WE) sound system in 1930. CinemaScope was installed in the mid-1950’s.

Meanwhile, the Palace Variety Theatre, had a seating capacity for 2,012. The stage was 37 feet deep and there were 12 dressing rooms. It too was equipped with a Western Electric(WE) sound system in the early-1930’s and offered films as part of the programming for several years, but mainly concentrated on being a live variety theatre. The Palace Ballroom flourished, and in 1952, it was equipped with a Wurlitzer 3Manual/9Ranks organ which had originally been installed in the Madam Tussaud’s Cinema, Baker Street, London, that had been destroyed by German bombs during World War II. This organ was opened by organist Watson Holmes.

It was announced in Spring of 1961 that the Palace Building would be closed in September 1961. On 26th March 1961 the Palace Picture Pavilion began a six months run of its final film “Ben Hur” starring Charlton Heston, presented in 70mm. Sadly, the remainder of the magnificent Palace Building, which included the Palace Variety Theatre, Palace Ballroom, Restaurant & Café were also closed in September 1961 and the entire building was demolished in March 1962.

A branch of the Lewis’s chain of department stores was built on the site, opening in 1964. In contrast to the opulence of the former Palace Building (and the still current Blackpool Tower Building), this new Lewis’s store building was a blot on the landscape. Lewis’s closed their store in 1993, and Woolworth’s moved in (they previously had a purpose built in 1938, Art Deco style store on the south side of the Blackpool Tower Building (today that building is a pub in the J.D. Wetherspoon chain). Woolworth’s went into administration in late-2008 and all their branches in the UK were closed. By 2016 it was in use as a Harry Ramsden Fish & Chip Restaurant and a Poundland store.

The organ in the Palace Ballroom was a 3 manual 9 rank Wurlitzer (not 19). It is now in Hobart in Tasmania.

For the avoidance of doubt, the Palace site became a branch of Lewis’s – not John Lewis ( as described above). Lewis’s was a separate concern. See https://en.wikipedia.org/wiki/Lewis%27s