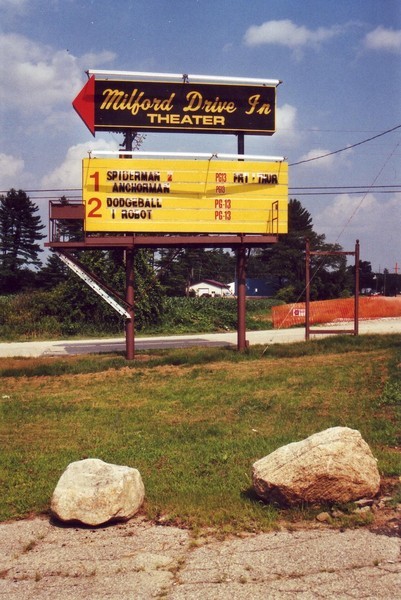 Built in 1958, the Milford Drive-In is not what could be called a triumph of 1950’s architecture or anything like that, but it is a rare opportunity to see a movie outside and bring your dog and a beer!

And you just HAVE to read the FAQs on their website, its a riot.

"Can I bring my dog to see the movie?

Although we don’t have an official policy regarding this, as long as they are not vicious, they are quiet, and on a leash, we don’t mind."

Rules on UNDER AGE DRINKING!

"NH does have a minimum drinking age. If you are under age, and you get caught, it’s your problem, not ours."

Anyway drive-ins are great fun, and this one seems more fun than others (dogs, beer).

We had a great time this summer. Thank You. During one weekend, you were showing Harry Potter & The Thunderbirds. We were there and lost a radio remote control. It is to a JVC Car Stereo. We were in the back row, furthest from the bathrooms. I know this is a longshot, but if you ever found one, we would really appreciate if you would contact us at “ THANK YOU

MY COMPLAINT THAT WAS SENT TO THE MILFORD DRIVE IN:

Admission (Revised 3/1/06)
Our Admission Price is $20.00 per car for one to six occupants (we don’t count children under 2 years of age). Additional Occupants (7 or more) are an additional $5.00 each. Your purchased ticket allows you to watch one or both movies playing on the same screen. You may not watch one movie on one screen and then watch the 2nd movie playing on the other screen.

When you purchase a ticket, the ticket person asks you what screen. They then issue you a colored, numbered ticket for that screen. Switching screens is absolutely not allowed. Doing so constitutes Theft of Services, for which you could be arrested. At the very least, if we catch you switching (and we do), you will be asked to pay for a second ticket or leave the Drive-In immediately.

The Drive-In signs legal contracts with the film distributors to run their films, for which the film companies are paid a percentage based on the number of tickets sold (for that screen). We are routinely audited by the distributors. They actually send people out to count the cars. If we allow switching screens, we are also subject to penalties. Please don’t embarrass yourself, your family and us by switching.

So that we are on the same wave-length about this, here is the inside scoop. Throughout the 2005 season, this rule has been becoming more and more of a problem. We have been audited nearly every weekend and the problem with screen switchers is showing up constantly. Earlier this season we were giving people that we catch the opportunity to return to their original parking spots. As of 8/19/05, this is no longer an option. Our previous “lack of enforcement” sends a mixed message, that it’s OK to steal, and if we catch you, it’s no big deal. From now on, it’s going to be a BIG DEAL! You’ll either have to pay up or you’ll be going home early. If we catch you twice, then we will pursue a more drastic approach.

The Milford Drive-In Theater has been showing you First Run movies for more than 30 years, and we are not going to lose that privilege because of a few people who want to break the rules and steal from the film producers. You can’t do it at the Indoor Theaters and you aren’t going to do it here.

I’ve been going to the Milford Drive-in for over 15 years. It’s a great place where you can have a great family time. It’s $20 for up to 6 people to see 2 recent movies that are always good ones and not “B” movie junk. You can also bring in your own food, which makes it a very affordable night out.

It’s been 2 years since my comment above. The Milford Drive-In is still going strong! I was there a few weeks ago. It’s also still $20 a car for up to 6 people.

I don’t know what “milforddriveinsucks” is complaining about above. He paid to see one movie then he thinks he can get another one for free. So what does he do at an indoor multi-theater? Does he sit and watch one movie and when it’s over does he get up and go into another theater and watch another movie for free? What an idiot! They should have called the cops on him. What he did was theft of service.

And finally, of course, the Milford Drive-In doesn’t suck regardless of what this moron says.

I went last night to see Tammy and Jersey Boys. Drive In is digital and they show a lot of the old drive in clips to welcome you for attending, PIK bug coil. But the intermission reel starts at the 5 minute mark not the 10 minute mark due to the digital ads. One ad was for a psychic reader. Huh? Oh well, they need to make money. There is also a track for rc cars 3.00 for 5 minute rental.

From the Milford’s About Us page:

The Milford Drive-In was built in 1958 and owned by a local group of people. Several area contractors contributed labor and materials during construction hoping for a share of future profits. The drive-in opened as a single screen theater with an 84 foot wooden frame screen, a combination concession, projection, and restroom building, a box office and a playground. During the 1960’s the drive-in was leased to and managed by another couple.

In 1969, the Scharmett family purchased the drive-in from the original owners and they have operated it continuously since then, except for three years during the 1970’s when the business was leased to Fall River Theater Corporation. Some of the many improvements the Scharmett’s have made over the years include: completely renovating the concession and restrooms, installing a new steel screen to replace the original wooden structure, building a new marquee, building a new box office, paving the entrance road, and being the first drive-in in New Hampshire to provide both AM and FM radio sound to its customers.

In 1984, the drive-in became a twin when additional acreage was cleared and a second screen was added. A second floor was constructed above the original building to provide room for a new projection room. At the same time the drive-in’s projection equipment was upgraded and continues to be upgraded to meet the growing technology demands of a modern operation.

Today, the Milford Drive-In is the only remaining drive-in theater in southern New Hampshire. Our patrons often drive from great distances just to enjoy the nostalgia, fun times, great food, and first run movies under the stars.

The International Motion Picture Almanacs on my shelf line up very well with the official history from my previous post. It also shows how slowly the IMPAs responded to changes that it continued showing the Milford as a single screen in its last national drive-in list in its 1988 edition.