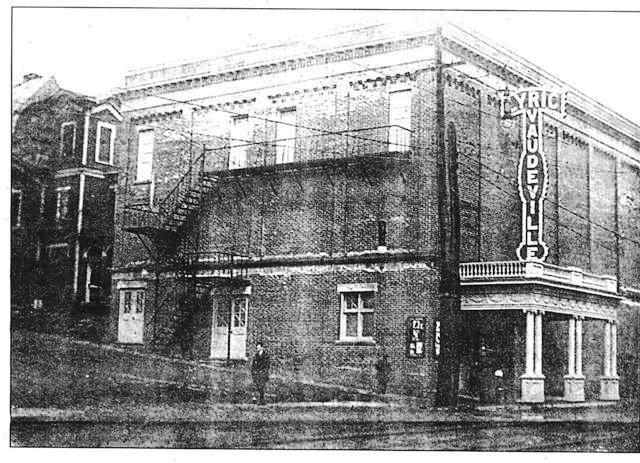 “The new Peterson & Wood Theater of Jamestown, NY, which has been under construction since July is practically completed. It will be opened as a moving picture and vaudeville house probably in December”.

(This from a blurb from a book called The Moving Picture World, Volume 18, issues 8-13 by Moving Pictures Exhibitor’s Association.)

The Lyric Vaudeville Theater, originally on the corner of Spring Street and E. 3rd Street in Jamestown, was built in 1909, and operated as a vaudeville house until about 1923. For a brief time it was Johnson’s Restaurant, although some claim it lasted as a theater well into the 1930’s.

In any event, it eventually fell into disrepair, and part of the frontage fell into E. 3rd Street in 1964, killing at least one person. The rubble was cleared and the building was reduced to one story in height, and is currently the Taco Hut Restaurant.

According to the Jamestown Post Journal: The theater opened its first season in 1913 under the management of Edward T. Connelly on Sept. 1, was painted in two shades of green and white, with panel effect and a scenic oil frieze and plaster plaques used to excellent advantage in some of the panels. In the lobby, there was an elaborate plaster relief ceiling, tan colored walls, with a 4-foot scenic frieze supported by massive columns, and a wainscoting of lincrusta (a type of thick embossed wallpaper.)

On January 1, 1964, a building across from Jamestown City Hall collapsed under the weight of snow, sending tons of brick in a massive tidal wave into the street, leaving three persons injured. The building housed three stores and a restaurant on the ground floor. The three injured were riding in a car which fate decreed should be passing by at the precise moment the upper floors of the three-story building crashed into Third Street. Most seriously injured was Helen Wellman, 41, of Price St. She suffered head injuries and was rushed to WCA Hospital. Her condition was critical. She was riding with her husband, Ira, 61, and their son, Daniel, 8. They were on their way to attend a movie at the Dipson Palace Theater. Rescue workers said it was a miracle the family survived. The car was flattened and battered in like a toy. The collapsed building had once been the Lyric Theater.

Back in 1911 when the Lyric Theater was two years old, a picture was taken by Leo Whitney, the movie projectionist, atop the structure with a searchlight, used at night to advertise the movies and vaudeville playing there. The roof of the building was constructed like a check mark, a gradual slope from the rear to the front with a sharp rise of the final four feet facing Third Street. This created a valley near the front wall and the collection of snow and ice at this point probably pushed the wall outward into Third Street.