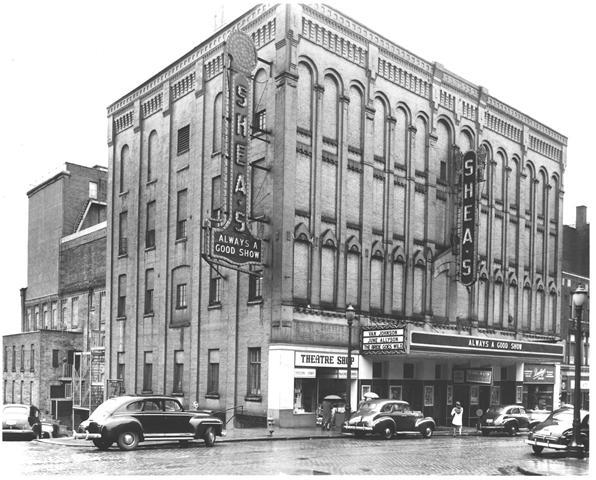 Allen’s Opera House opened on September 3, 1874, but the original building was destroyed by fire in 1881. The house was rebuilt by the original owner, Abner E. Allen, but financial losses due to another fire in 1894 resulted in the sale of the house to Charles Samuels in 1898.

The theater operated as the Samuels Opera House until being taken over by the Shea circuit in 1919. It was extensively rebuilt in 1927 to the plans of architect Victor A. Rigaumont. It operated as Shea’s Theatre until the early-1960’s, though in its later years it was operated by the Dipson circuit.

In its earlier years, the house had seated about 1,800, but the interior had suffered severe deterioration during the years it was vacant, and Jamestown Little Theatre chose to build a smaller auditorium within the gutted shell, and it now seats 400.

THIS PHOTO IS THE PROPERTY OF ROBERT SCHLICK AND IS NOT TO BE USED WITHOUT MY PERMISSION!

When Shea’s Theatre was extensively rebuilt in 1927, the architect for the project was Victor A. Rigaumont. This PDF of a page from the November 1 issue of the Jamestown Evening Journal has an illustration of the auditorium and a few paragraphs about Rigaumont.