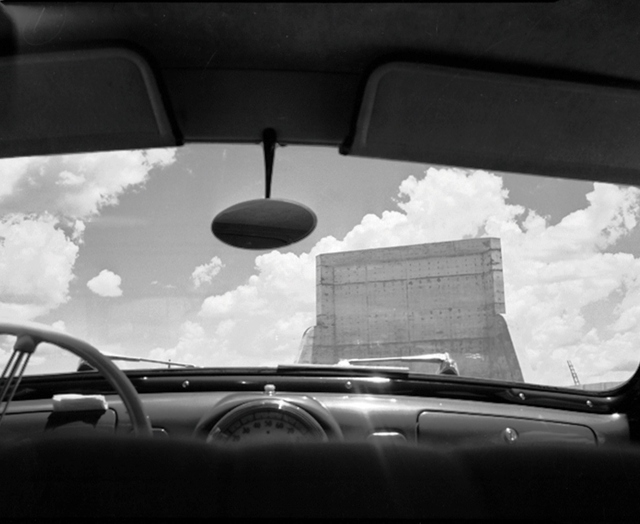 The Bowie Boulevard Drive-In opened July 18, 1941 with Abbott & Costello in “One Night in the Tropics”. Located on Benbrook Highway or at Highway’s 80 and 377. It was operated by Claude Ezell and Associates Inc. It was closed October 23, 1961.

Uploaded picture of the Bowie Blvd Drive-In from 1948. I think it is right drive-in. If not let me know.

EXCELLENT photo, Drive-In 1954! Its correct name was the Bowie Boulevard Drive-In Theatre, which was later shortened to the Boulevard Drive-In Theatre. It opened on July 18, 1941 and was Fort Worth’s very first “ozoner”, operated by the Underwood-Ezell/Claude Ezell Circuit. After it closed in December of 1960, it was torn down almost two years later and on its site was built a Neiman Marcus store. The building now houses a learning center for the Fort Worth ISD.

Three drive-ins were announced to open in 1941 in the Dallas-Fort Worth market and would become the first drive-ins in North Texas. Two were in Dallas — the Northwest Highway Drive-In and the Chalk Hill Drive-In with this entry for the Bowie Boulevard Drive-In that opened July 18, 1941. All were part of the Underwood Ezell circuit which included the the Drive-In Theatre opening in 1940 in San Antonio and Houston’s South Main Drive-In. The screen tower was 60' high and made of steel utilizing a 35'x50' screen with RCA equipment. Cones in the ground provided the sound and ushers guided cars to spots which were tilted upward on ramps. The project was said to have cost $50,000. Ezell would partner with Interstate Theaters Circuit to improve those theaters' operations that same decade.

To comply with the Paramount consent decree, Ezell and Associates and Interstate Theaters divvied up their 12 theaters and the Bowie headed to Interstate along with the South Main and the Shepherd in Houston, Buckner Blvd. in Dallas, Mansfield in Fort Worth and Cactus in Pharr. Ezell kept the Belknap in Fort Worth, the Northwest Highway in Dallas, the Circle in Waco, the Irvington, Hempstead and Winkler all in Houston. On December 1, 1955, the Bowie was ordered out of the Interstate portfolio and became part of the Cinemart Theaters circuit. Cinemart ran the theater as a sublease with Interstate holding on to the property. The Bowie lasted right at 20 years with its last day on October 23, 1961. Interstate Theaters sold the theater which was razed for a retail venture.

Added clearer image of the 1941 photo plus close-up of ticket booth (admission 30 cents for adults, 10 cents for kids).

Link for the crispest version of UTA library photo.