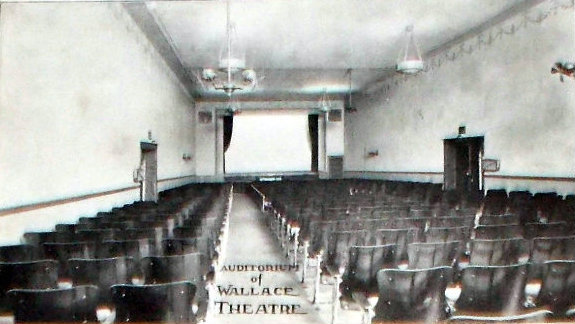 The Wallace Theatre closed at the advent of sound films. The projection booth was on E. Liberty Street and the screen was on the north edge of the building. Ed Mott bought the Wallace Theatre, closed it and moved its seats to the Wayne Theatre. The Wallace Theatre was demolished in 1933 for a new J. J. Newberry’s store.

Here is an item about the Wallace Theatre in the January 8, 1916, issue of The Moving Picture World:

“Mystery in Series of ‘Accidents.’

“A mysterious explosion which wrecked the Wallace theater, at Wooster, O., some days ago, has been the subject of an investigation by the Ohio fire marshal’s office, the curiosity and suspicion of the department having been aroused by a series of fires in Wooster. The circumstance that the operator at the theater was shot the day after the fire, at first, it was thought, by accident, is also under investigation. The department has not yet reported any findings on the matter, but intends to look into it further after the operator recovers from his wound.”The February 12, 1916, issue of the same publication had an item about another theater-related crime in Wooster:

“E.P. Mott, manager of the Lyric theater of Wooster, Ohio, writes that a robbery was committed in his theater on the night of Jan. 10 and the heads of his two Power 6A machines with extra parts were stolen. The number of one of the machines is 18090-21666. Mr. Mott wishes to notify managers to look out for this number and to notify him if it turns up.”The March 4 issue of The Moving Picture World reported on the arrest of J. B. McCormick of the Alhambra Theatre, but didn’t say anything about the gunshot wound suffered by the owner of the Wallace Theatre:

“Wooster, O.—After several weeks' Investigation by the police of Wooster, O., J. B. McCormick, owner of the Alhambra theater at that place, was arrested charged with causing explosions which wrecked the Wallace theater, a rival moving picture house, owned by H. H. Ziegler.

“McCormick purchased the Alhambra about a year ago, and shortly after the Wallace was opened, causing a substantial falling off in the receipts at the other house, by reason of a more favorable location. This, it seems, according to McCormick’s confession as reported by the police and subsequently made in open court, drove him to desperation, and his attempts to destroy the rival house followed. The first explosion occurred on December 19, but although it bore suspicious evidences of an outside agency, the local authorities finally came to the conclusion that it was caused by natural gas. McCormick stated that he used thirty sticks of dynamite on this occasion as well as in causing the recent explosion on February 12, when eleven of the thirty sticks failed to explode.

“McCormick also confessed to having stolen two projecting machine ‘heads’ from the Lyric, another Wooster house, in order to prevent its opening on a certain occasion, and then atoned for the theft by lending Manager Mott, of the Lyric, one of his own projectors.

“The police state that they managed to fasten the crimes on McCormick through evidence discovered in his room above the Alhambra. The dynamite, it is stated, was stolen from a local hardware house.” The March 18, 1916, issue of The Moving Picture World reported that J. B. McCormick had filed for bankruptcy:

“Wooster, Ohio.—John B. McCormick, who has been operating the Alhambra motion picture theater in Wooster, O., and another picture house in Fredericksburg. O., his home, has just filed a voluntary petition in bankruptcy in the United States district court in Cleveland. His liabilities are scheduled at $10,619, with assets of $9,090. In addition to the picture theaters, he is owner of an electric light plant at Fredericksburg.”I presume that Mr. McCormick’s arrest ended Wooster’s theatrical crime wave, but I’ve been unable to find out who shot Mr. Ziegler. Had McCormick been arrested for that, I’m sure the magazine would have reported it. A report in a book of official documents of Ohio published in 1917 indicates that McCormick pleaded guilty to dynamiting the Wallace Theatre and was sentenced on February 12 to a term of five to ten years in the Ohio State Penitentiary.

This one opened on July 19, 1913 with George Gebhardt in “The Trapper’s Mistake”. According to a news item, the theatre building was designed by Stanley Power and seating was 400.