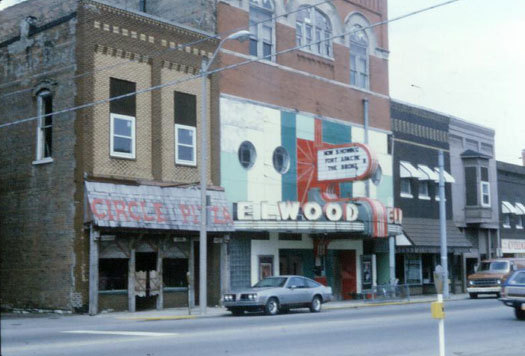 Built as an Odd Fellows Hall, it was converted into the Mack Theatre which opened December 15, 1927 with Bert Lytell in “Alias, the Lone Wolf”. A piano, violin & cello trio provided musical accompaniment to the movies. It was renamed Elwood Theatre on April 6, 1932. It outlived the city’s many other indoor theatres until its final closure on December 3, 1981 with “American Werewolf in London”.

What a waste to tear down a lovely brick building like this. Nice detail work.

Looks like a downtown full of parking lots. Lovely.

Elwood looked pretty ratty. They’ve lost a lot of population, and about half of downtown is gone. In the old picture above, everything is gone except the building just past the highway sign, which has been mutilated with a horrible fake stucco front.

The actual timeline is much closer to this:

The long-standing Odd Fellows building was purchased in 1927 for theatrical use. The venue was now steel enforced and launched December 15, 1927 with “Alias, the Lone Wolf” as the Mack Theatre. On April 6, 1932, the theatre became the Elwood Theatre.

The last film at the Elwood Theatre was “American Werewolf in London” on December 3, 1981. Scheduled showings of “Carbon Copy” starting the next day were not shown as the theatre closed abruptly.

After standing empty for several years, the Elmwood auditorium was gutted and twinned. The Elmwood Twin Cinema brought movies back to the city. The auditoriums were labeled Cinema East and Cinema West. The venue launched November 21, 1984 with “Gremlins” and “Ghostbusters.” But indifference was the reaction as the theatre closed March 15, 1988 with “Critical Condition”, “The Golden Child” and “Lady and the Tramp”.

The building was used for live theatre in 1990 before falling into disuse again. On June 17, 2000, the roof collapsed taking part of the side wall without injuries. The building was demolished later that year.

Note: The Lyric Theatre was located across the street at 1529 Main according to the local newspapers and not here. The Classic Theatre was also on the opposite side of the street.