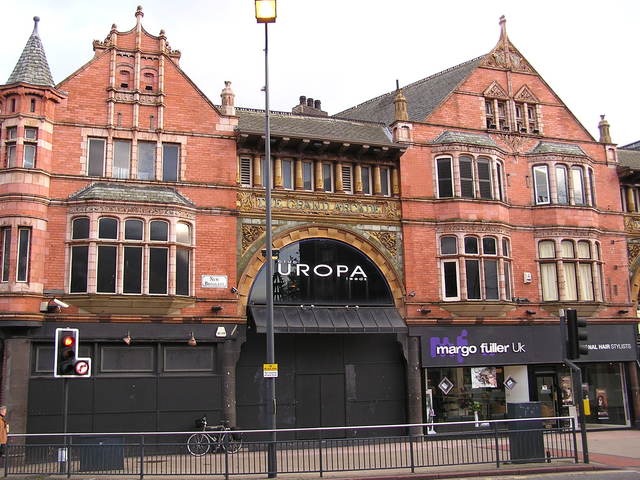 Located in Leeds city centre, next to the Grand Theatre. The Tower Picture House was a conversion of part the Grand Arcade (a Victorian shopping arcade) to the plans of Leeds based architect J.P. Crawford. It opened on 12th April 1920 with Henry Edwards in “The Kinsman”. It was first operated by New Briggate Picture House Ltd., and was later taken over the local chain Tower Picture House (Leeds) Ltd. (Associated Tower Cinemas Ltd.).

A Western Electric(WE) sound system was fitted in late-March 1930.

The Tower Picture House was closed on 7th March 1985, and was converted into a discotheque. This later closed and after a refurbishment (which revealed previously hidden architectural details) the building opened on 8th November 2014 as a pub and cocktail bar known as The Brotherhood of Pursuits and Happiness.

The Tower was a great place! It had a very steep slope to the floor in the stalls and the whole of the side walls and screen were covered by gold curtains which went from floor to ceiling. The ceiling did have some wonderful plasterwork on it. It was kind of the city centre poor relation behind the ODEON and ABC which were just to the side of it and behind it, But it was great. They use to show the big films when the other 2 had done with them so I use to wait to see them there if they weren’t films that had stereo soundtracks. They also use to show double bills and kids clubs on weekends. Godzilla v some other man in a rubber suit. I went to the last show just to say that I did support it right upto the very end. I did get to have a sneak peek inside after it had closed and was very surprised to see that behind those curtains which had been removed was a very ornate auditorium with plaster figures down the side walls and marble pillars beside the screen.

I remember this cinema after it closed we asked if we could buy some seats and had two Sundays there removing them from the stalls and the pullman seats from the balcony. We also got the gold screen tabs and the wall drapes. All went into the Palace at Malton.

It’s good to know that something was saved nic. Did you by any chance take any photos while you were in there?

The Brotherhood of Pursuits and Happiness pub opened in the former cinema on 8 November 2014. The centre piece is an exposed section of the old Victorian shopping arcade with a first-floor balcony that serves as a cocktail bar and pool space.

Whilst I was an Assistant manager for ABC in Yorkshire I saw two films here, both with underwater sea themes , viz: ‘Tentacles’ (poor although I should have guessed as it was first run) and ‘The Deep’ (good – 2nd run to the Odeon).

I viewed these from the pleasant little circle courtesy of the Manager, a nice old chap called Mr Thackray.

I thought that the Tower had a much nicer atmosphere than our own theatre, the ABC, Vicar Lane which had a cold feel to it especially after screen two was split into two awful ‘cock – eyed’ affairs; this was no doubt the brain child of some overpaid Golden Square idiot who would only ever have viewed films in the preview theatre there……..