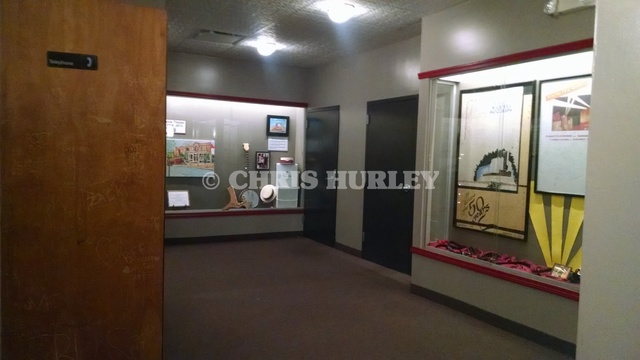 A late C. Howard Crane design in Art Moderne style, opening in late-1940, the Civic Thetare sat about 550 on the main floor and about 200 in the balcony.

The theatre has an elegant blade marquee and elegant facade, in shades of red and off-white.

Though officially just the Civic Theatre, it was advertised as the Farmington Civic Theater, so as not to confuse it with the Civic-Detroit (or Detroit-Civic, as it was variously called) a few miles away.

The only time the Civic Theatre ever closed in its history was in the winter of 1989-90 when Louis Wiltse tastefully converted the balcony into a piggy-backed second auditorium. It was reopened as the Farmington Civic 2 in early-1990, showing second-run fare.

The Farmington Civic Theater is one of the few old-fashioned movie houses still in operation in all of southeastern Michigan, and has lost none of its charm and style over the decades.

According to “Andrea,” the theatre has been operated by the city of Farmington since 1999. For more information see the Related Website to the right.

The blade marquee was recently shown on an episode of the TV show “Snapped.”

Visited this theater two weeks ago for the first time, to see “The Founder,” and what a surprise gem! Beautiful old theater, updated with digital projection and surround sound, fresh popped popcorn, and only $5 per person. Had to go up three flights of stairs to the balcony for the second screen, but worth it. Will absolutely go back again, and anyone in the area that has not seen a film here, go. You’ll be happy you did.