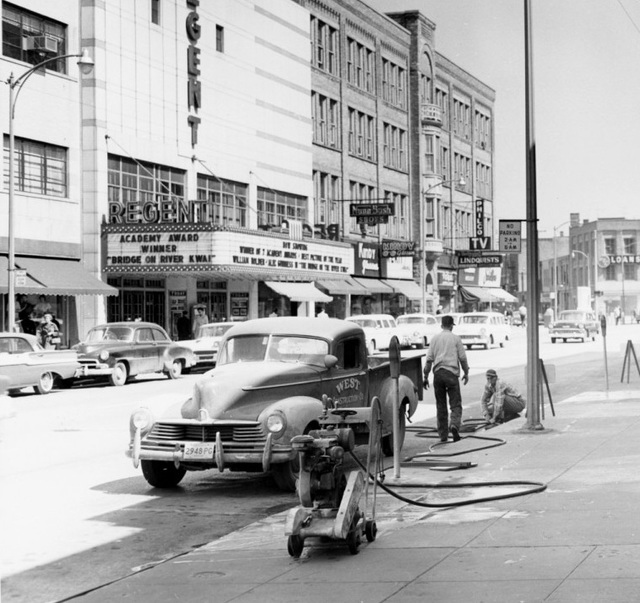 The Regent Theater was opened in 1916, seating 1,100 with a balcony, and originally operated as a live theater, although vaudeville and movies were also presented. The theater was later remodeled in an Art Deco style, including a new facade and marquee. In 1939, it was the first theater in the area to screen “Gone With the Wind”. By the early-1940’s, it was operated by Paramount Pictures through their subsidiary W.S. Butterfield Theaters Inc.

The Regent Theater was demolished in 1972, along with many other historic buildings in downtown Muskegon to construct the Muskegon Mall, which itself was torn down in 2003.

The Regent Theatre was built by local exhibitor Paul Schlossman, who later built the Michigan Theatre, now the Frauenthal Center for the Performing Arts. Like the Michigan, the Regent was designed by Detroit architect C. Howard Crane.

Schlossman’s obituary in Billboard of January 28, 1950, said that he bought three theaters at Muskegon in 1913, and later built the Regent and Michigan Theatres in Muskegon and the Strand Theatre in Muskegon Heights.

This brief biography7 of Schlossman at the Frauenthal Center web site notes that he also built the Rialto and Majestic Theatres in Muskegon, and says that they were also designed by Crane.