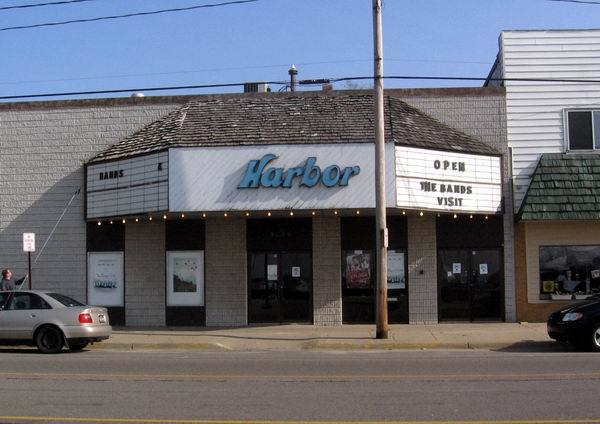 The theatre did not receive its current name until 1965, when the Fonstein family purchased the theatre. When the Dhuses family, the current owners of the theatre, bought it in 1976, they retained the Harbor Theatre name.

In 1977, a fire broke out in the theatre and the Harbor Theatre was gutted and closed. It reopened two years later and, in 1981, the cinema added an additional screen.

The Harbor Theatre closed in June, 2001 after 80 years of showing movies for the Lakeside neighborhood. Citing increased competition from the Plaza 1 & 2, a second run theatre in nearby Norton Shores, the old movie house had been leaking money for months before closing. At the time of its closing, the theatre was still charging just $1.50 for admission.

The Harbor Theatre reopened in March of 2008 showing a mix of first and second-run and classic films and by 2017 was a first run theatre. It was closed on December 27, 2018 and the business was transferred to the nearby Plaza 1 & 2, which was renamed Harbor Theatre

The Harbor Theater is being reborn again. LA Visions investment group has done extensive renovations and will be reopening in December of this month. It will have a new look and new venue mixed with the some of the great oldies. For further information contact Patti Redeker, m
Marketing & Promotion Coordinator, at the Harbor Theater & Cafe – Coffee At The Lakes. The new web site is harbortheatrecafe.com

In the 40’s and 50’s The Harbor Theatre was known as the Our Theatre.
I was living in Muskegon Michigan then.

If you would like to see what is playing at “The Harbor Theater” in Muskegon you can do so at….

Well I guess since this site is not allowing photo uploads right now I’ll just add a link to my photo of the theater. http://www.flickr.com/photos/eridony/2656318142/

I took the photo July fifth, the lighting is not the best but I like the photo because I was able to take it while several patrons were entering the theater.

Updated website link: https://www.harborshowtimes.com/ Both auditoriums now have a limited number of reserved leather recliners for an additional charge of $2.00 with free popcorn and free refills on drinks. Movies showing are all mainstream first release films.

The Harbor Theatre closed at this location on December 27, 2018 and moved to the former Plaza in nearby Norton Shores. They continued there until closing during the COVID-19 pandemic of 2020.