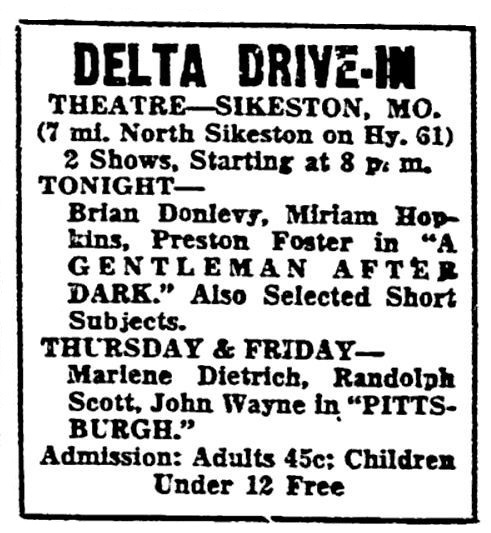 The Delta Drive-In opened July 4, 1949 with Maria Montez in “Ali BAba and the Forty Thieves”. The drive-in parking ramp could hold 450 cars. It was operated by Miss G. Twitty and Andy Dietz. Andy Dietz was a buying and booking agent for Co-Operative Theatres. He was also in the partnership operating the Home of the Stars Drive-In, in Sikeston and Parkview Drive-In Theatres in Jackson, MO.

The speaker poles were removed in 1989 and the screen was removed within the next 2 years. Concession stand burnt down in 2009 after being turned into an apartment. I am the son of the owner of the property and they did save some of the 70s posters from the drive in.

There’s a 1975 photo of the Delta at VintageAerial.com.

“Delta Drive-In Theater, the first outdoor theater of its kind in the Sikeston district, will open for business Monday night, July 4, it was announced today … An initial capacity of approximately 250 automobiles has been provided. Owners of the new enterprise are Earl Ferrell, of Charleston, and Mrs. Geraldine Twitty and Miss Geneva Alliston, of Sikeston.” That was on the front page of the July 1 Sikeston Daily Standard.

“Approximately 300 to 350 cars were admitted to the new Delta Drive-In Theatre, Highway 61, seven miles north of Sikeston, opening night Monday July 4.” That was page-4 news in the Sikeston Herald three days later. The Delta apparently didn’t advertise in the Herald. 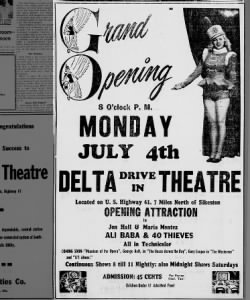