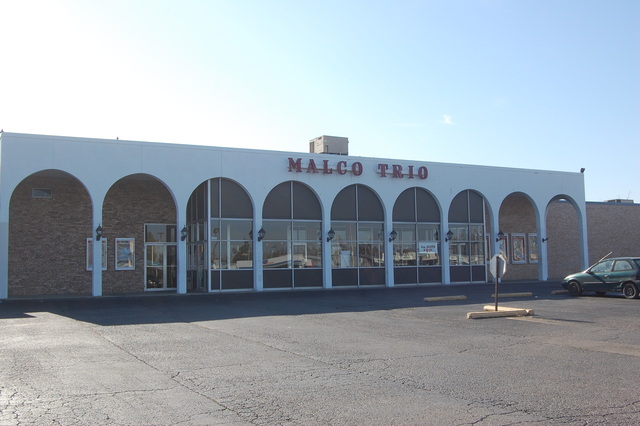 Small triplex operated by Malco Theatres. It is located on Malone (Highway 62) which is the main road through Sikeston. Three small auditoriums seating a little over 700. This is the last theatre that Malco operated in Missouri.

This place needs a makeover. Pretty quick too.

The Malco Trio has probably been updated, as it is open again after having been closed down by the City of Sikeston in October, 2011. The city cited numerous deficiencies in the building, owned by a St. Louis Realty company and rented to Malco. Even an executive vice president of Malco had referred to the Trio as “a dump” and an “embarrassment,” according to this article from the Southeast Missourian.

I haven’t found when the deficiencies were corrected and the house reopened, but I can’t help thinking about O. W. McCutchen, who operated the theaters in Sikeston from the mid-1920s until his death in 1954. He probably would have been appalled at the condition of the Trio.

The local paper ran frequent articles about upgrades and redecorating at the Malone and Rex Theatres during the years McCutchen was operating them. One fall, 1938 article said that the eggshell-white, silk summer drapes in the Malone Theatre had been taken down and the black and silver velour drapes used the rest of the year had been reinstalled. Two sets of drapes! I’ll bet McCutchen had each set cleaned every year before they were put back up, too. Modern theater chains could learn something from old-time showmen like O. W. McCutchen.