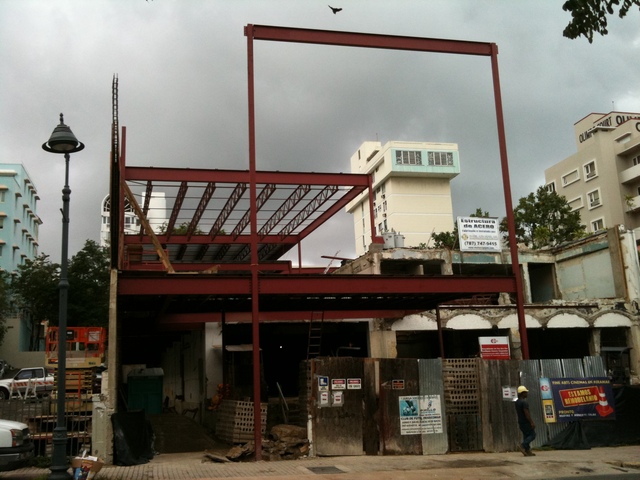 Caribbean Cinemas isnt closing the Miramar Fine Arts. For them, that cinema its a little gold mine and have its own clients that always go there. They have been planning the renovation for a long time but since this is the only fine arts cinema, they cant close it for the renovation period. So they decide to make this new cinema, since they have to renovate the old one and second to have a ‘back-up’ cinema since plaza las americas is always full of clients (since the Cinevista closed its doors). Everyone told me that they will not close the Miramar Fine Arts…but who knows!

Does anyone knows if the new Fine Arts will have a Digital Screen like Cine en BallajÃ¡ did?

I’ve heard there are differences between the Caribbean Cinemas people and the owner of the building and there’s now a big probability that the Fine Arts in Miramar will close down. Let’s hope they do reach an agreement.

Competition on the way in San Juan:
http://tinyurl.com/548ko4

Sept. 12, 2008 post by ken, the link is about an Imax theater being built in San juan. I emailed Imax Corp. and they responded there were no plans for an Imax in SJ. Anyway, Imax would not compete with Fine Arts, it is a big screen format for certain films. lately used for special prints of mainstream movies including 3D versions. The Fine Arts building is owned by Caribbean Cinemas. It was bought by Caribbean’s president, Victor Carrady and 2 former VPs of Commonwealth Theaters. One of them passed away and don’t know if the estate is still a partner or sold the shares to Caribbean. I don’t know the whereabouts of the other partner. I think he retired to Florida.

Caribbean Cinemas closed the Fine Arts and is curremtly renovating it. It will have six screens and will be like the new Fina Arts Cafe in Hato Rey.

Just came back from San Juan, the Fine Arts is a shell, they even took the roof out to make it higher and accommodate stadium seating in the new auditoriums. It’s a major job and will probably take a while.
Andy Roura

Fine Arts Miramar to reopen this Summer. Well, it is Summer already.

Miramar Fine Arts will reopen next Thursday, Dec. 15. Can anyone take one or two pictures and post them here? Will appreciate it.